- Akinfenwa's deal with the lower league club expires this season

Wycombe Wanderers striker Adebayo Akinfenwa got a surprise after helping his side promote to the Championship for the first time in their 133 years of existence.

Premier League winning manager Jurgen Klopp gave the English star of Nigerian descent a call to celebrate their triumph with him.

Their promotion was confirmed following their 2-1 victory Oxford 2-1 at Wembley Stadium on Monday, July 13th.

A goal each from Anthony Stewart and Joe Jacobson rendered Mark Sykes' effort a mere consolation as The Chairboys progressed to the England second-tier competition. 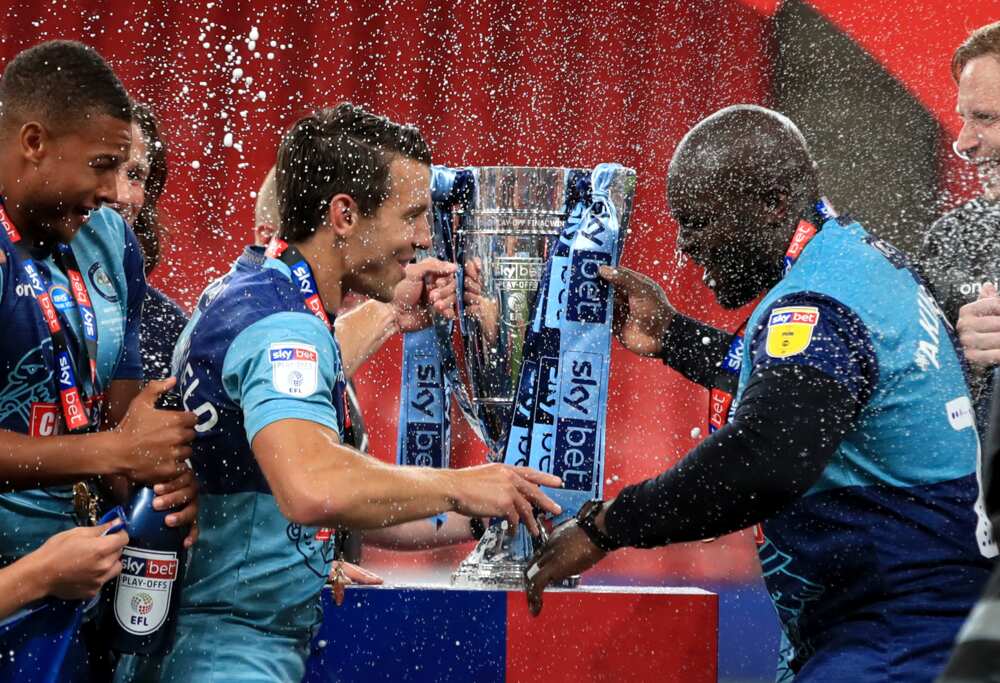 Akinfenwa made a wish that he would like to speak with the German-born manager and the Liverpool handler wasted no time in responding to the request.

Though his current expires at the end of this season, the 38-year-old could not suppress his excitement when speaking with Sky Sports.

He said: "Look, look, let me calm down. First and foremost, I want to thank God, because today he made the impossible possible. Four years ago I stood in front of you and I was technically unemployed.

"Let me tell you something, the only person that can hit me up on WhatsApp this time is Klopp, so we can celebrate together. You get me? Oi!

"I hope my story shows that the only opinion that matters is the opinion you have about yourself. I was lucky and blessed to find a manager and players who believed in me, so we are here today, and I'll say it for the people in the back: Wycombe's in the Championship.

"Watched the game, well I didn't see the post-match interviews but Hendo [Jordan Henderson] or one of my players told me that you want to get, what did you think to say? If you could get in contact with me on WhatsApp, here we go!

"Congratulations. I'm pretty sure your whole life at least a Championship player and now finally, you are there. Well done. "Great, great victory. Even in strange times, I hope you celebrate appropriately."

Otherwise known as The Beast due to his bulky physique, Liverpool has been Akinfewa’s boyhood team and the 38-year-old once joked that Reds manager Jurgen Klopp should sign him.