A Nigerian UK-based woman identified as nurse MJ is surprised to find the popular Lagos bus called danfo in England. Nurse MJ took to her page on the micro-blogging platform, Twitter, to express her shock.

In the video she posted online, one could see the Lagos signature bus. The bus is just like the ones in Lagos except that it had a different plate number.

The bus was parked outside a building alongside other cars in the parking lot. According to the medical practitioner who shared the video, she said that she thought the bus is only made for Lagos.

According to her, she wants to know what it is doing in England. 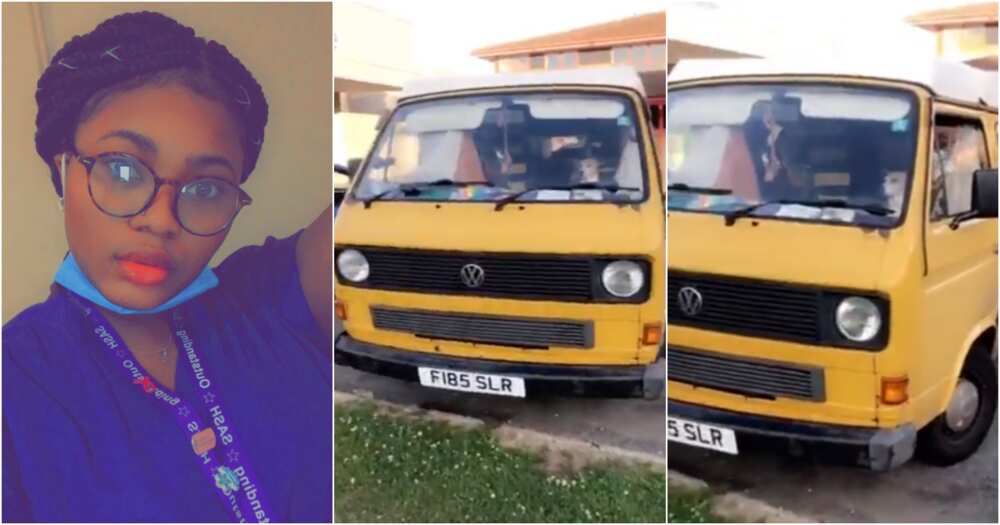 The UK-based nurse shared a video of the bus as evidence to her post about it.

As expected, Nigerians took to her comment section to react to her post. Many shared funny reactions as they

In other news, Legit.ng earlier reported that a widowed female danfo driver got help from Nigerians after a lady narrated her moving story.

A Nigerian lady identified as Ibi Kontein on Twitter shared a touching story of a widowed female danfo driver who was harassed by other male drivers.

According to the lady, the men in the park failed to help the driver from filling her bus with passengers, so, Ibi stepped in and decided to be her personal bus conductor and later found out that the woman lost her husband and was left with four boys to take care of.

According to her, the only thing the woman got from her late husband was the danfo bus that he rode to earn a living. So, she decided to use part of his burial money to see herself through a driving school and then became a bus driver.

I was a bus conductor in Lagos at weekends, returned to Ibadan for classes on Mondays | Legit TV