- Harry Maguire has been heavily criticised after poor defending against Southampton

World's most expensive defender, Harry Maguire, has been heavily criticized for his role in Manchester United's 2-2 draw with Southampton at Old Trafford.

The Saints took the lead just 12 minutes into the encounter through Stuart Armstrong's close-range effort after Paul Pogba lost possession of the ball in front of the box.

Eight minutes later, unmarked Marcus Rashford powered a low shot from the edge of the six-yard box in between Alex McCarthy's legs.

And in the 23rd minute, Anthony Martial put the Red Devils in front for the first time in the game through an unstoppable shot.

The Frenchman drove into the box from the left flank before unleashing the thunder with his right foot. 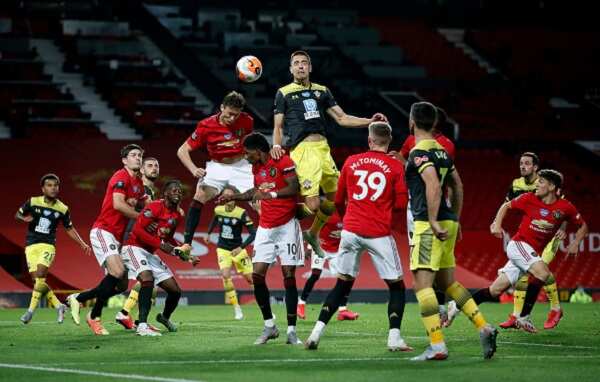 However, a last minute equaliser from Michael Obafemi ensured the home team was denied maximum points - although still remain unbeaten across competitions.

Meanwhile, the former Leicester City man who moved to Old Trafford in a world-record deal for a defender (£80 million) last summer has now been dragged by football fans across social media.

He was pictured marking his teammate when he was meant to be on an opponent when the second goal was scored.

The stalemate stopped Man United from rising above Chelsea and the Foxes with just three matches left to play.

One fan said: "Maguire marking his own player"

Another added: "£80M Harry Maguire marking his own player on the corner instead of the opposition, I’m finished.

The third person expressed: "On United's late equaliser. Check who Maguire was marking." The fourth person said: "Ole: Maguire why you marking your teammate!!? Maguire: He is cake"

Paul Scholes tried shielding Maguire from the error by blaming Victor Lindelöf but one fan called out the attention of the legendary midfielder to the blunder made by his countryman.

Caleb Mattatall said on Twitter: "Don't let Lindelöf's error stop you from seeing Maguire marking a teammate on that corner. Shambolic defending in a crucial moment."

Although the English man has made some impact on the Red Devils team, he has equally made some damning errors leading to the opposition scoring crucial goals.

Legit.ng earlier reported that Manchester United are now at the forefront to sign £60million rated Ben Chilwell from Leicester City amid interests from rival clubs including Chelsea and Manchester City.

The English defender has emerged as Ole Gunnar Solskjaer’s top priority as the United boss continues to build the team in a bid to challenge for the title next season.

And the move will cast doubt over the future of Chilwell’s England teammate Luke Shaw.