- Two southeast senators on Tuesday, July 14 had a heated verbal exchange on the floor of the Senate

- The argument between the southeast senators was over foremost Nigerian entrepreneur, Chief Innocent Chukwuma

Senators Chukwuka Utazi and Ifeanyi Ubah on Tuesday, July 14 had a heated verbal exchange on the floor of the Nigerian Senate.

The argument between the southeast senators was over Anambra-born billionaire businessman and founder of Innoson Vehicle Manufacturing Co. Ltd, Chief Innocent Chukwuma.

Utazi, senatorial representing Enugu north in the upper chamber of the National Assembly, had through a point of order urged the Nigerian Senate to note Chukwuma, is one of the industrialists boosting Nigeria's economy. 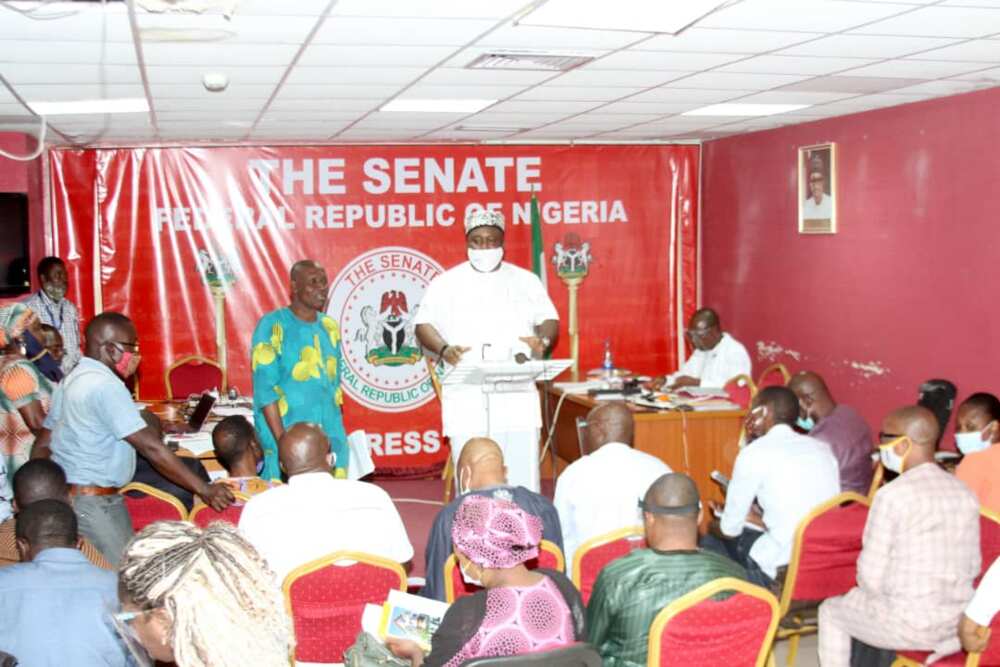 According to him, while Chukwuma is contributing his quota to the development of Nigeria, some Nigerians, especially those of southeast origin, are deriding and running him and his company down.

The comments by Utazi irked Senator Ubah who ignored Senate rules and openly opposed his colleague over his comments.

Senate President Ahmad Lawan had to intervene to restore calm as both senators exchanged words openly.

Briefing journalists after plenary, Ubah stated that it was out of place for Utazi to attempt to champion issues concerning one of his constituents in Anambra state.

Chukwuma and Ubah are both from Nnewi in Anambra state.

Ubah, a prominent businessman before venturing into politics, noted that he has been subjected to media attacks recently claiming that he rejected patronage of lnnoson vehicles during a Senate committee meeting.

He said that contrary to the media reports, he is the biggest patron of Innoson vehicles in the southeast.

Elections 2019: List of 14 battleground states that may be won and lost by Buhari and Atiku

His words: “Presently, I am the biggest private patronizer of lnnoson vehicles in the southeast today.

“The very first car that I gave my only beloved daughter when she clocked 18 years is an Innoson vehicle which she still drives till date. The car is still parked in my Lagos residence.

“It is therefore ridiculous and laughable to insinuate that a man who bought his only daughter an lnnoson vehicle would kick against procuring the same brand of the vehicle for senators.”

In the last few years, there have been growing calls by Nigerians for government agencies and the National Assembly to patronise Innoson vehicles as a way of encouraging indigenous investors.

While some like the Nigerian Army and the Federal Road Safety Corps have been patronising Innosson, the National Assembly is yet to buy from the Anambra-born businessman.

He tweeted: “It would be worthwhile if the federal government can prevail on the National Assembly, state houses of assembly and all state governors to only buy Innoson automobiles. We can even enact laws to this effect, to promote and protect our local products.”

Meanwhile, Lawan on Tuesday, July 7 explained why the Nigerian Senate refused to declare Senator Orji Uzor Kalu's s seat and position vacant during the period of his incarceration.

Lawan told leaders of thought from Abia state that what the Senate did by preserving Kalu's seat and his position was the right and just thing to do.

The delegation of the leaders of thought were led by Senator Chris Adighije and Senator Nkechi Nworgu.