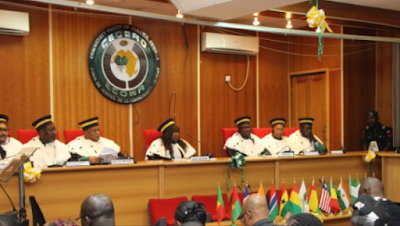 The ECOWAS community court of justice sitting in Abuja has awarded a N50 fine as nominal damage against the federal government in favour of S.E. Aladetoyinbo, judge of a federal capital territory high court.

In the suit marked ECW/CCJ/APP/27/18 Aladetoyinbo had claimed that his fundamental rights to freedom from torture was violated as a result of the publication of a letter of warning issued to him by the National Judicial Council (NJC) which is an agent of the federal government.

He also claimed that the NJC breached his right to a fair hearing because the committee was irregularly composed and incompetent.

Aladetoyinbo submitted that the warning emanated from a petition to the NJC by dissatisfied judgment debtors following a judgment he delivered in a land dispute that was later upheld by the supreme court.

He said the NJC committee whose proceedings were marred by irregularities had issued him a warning in addition to placing him on a judicial watch list for nine months.

The applicant added that the actions of the NJC traumatised and demoralised him and also “destroyed his integrity, respect, honour and good name built over three decades of unblemished service to the respondent”.

He prayed the court to issue an order setting aside the letter of warning, and issue cost N855,625,000 as general damages, another N12,230,750 as cost of litigation as well as a formal apology in print and broadcast media, among others.

Delivering judgment on Wednesday, a three-man panel of judges led by Edward Amoako Asante agreed with the plaintiff that “the composition of the committee that conducted the disciplinary investigation was irregular, thus incompetent and its decision being null and void as it violates the applicant’s right to fair hearing.”

Although Dupe Atoki who read the judgment acknowledged that the applicant’s right to fair hearing was violated, she held that he did not provide evidence to prove that he suffered prejudice due to the letter.

“Where an applicant has established a violation of his/her rights but fails to prove that the ensuing prejudice or harm/injury, the court will award only nominal damages which is usually a symbolic token to recognize violation of the said right.”

Consequently, the court awarded Aladetoyinbo the sum of N50 against the respondent for the violation of his right to fair hearing.

The court declined other reliefs sought, including the applicant’s prayer for a public apology from the federal government.