Mikel Arteta lifted his first title as a manager after guiding Arsenal to FA Cup glory at Wembley Stadium over the weekend.

Before winning the trophy, the Gunners had endured an unimpressive season having eighth on the Premier League table, and their chances of playing in Europe - dashed.

But the FA Cup victory qualifies them to play in the Europa League next campaign and the former Manchester City assistant boss is not willing to take chances before then.

SunSport reports that he is planning a mass exodus of about nine of his players in a bid to raise funds for the new arrivals.

The publication revealed that Arteta's budget has been increased by £30million after his side showed class in Saturday's win over London rivals. 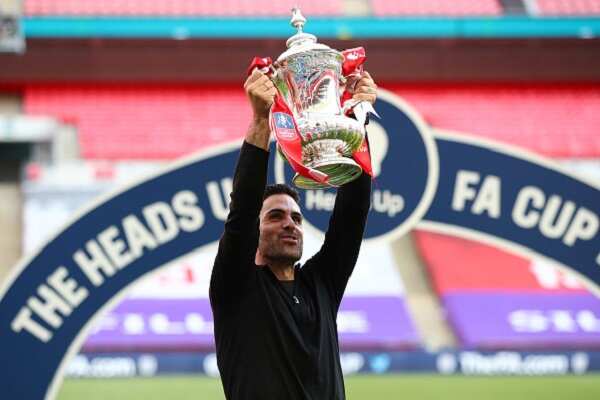 Frenchman Alexandre Lacazette tops the list of stars who could be on their way out of the Emirates Stadium if the club gets the right amount of money.

He scored a total of 10 goals and six assists in the Premier League - a stat considered very low for a striker of his calibre.

The attacker was forced to compete for a spot in the Gunners' team youngster Eddie Nketiah towards the end of the season.

Hector Bellerin could be on his way out of the club and has been linked with a move to Juventus, Inter Milan and Sevilla already.

Rob Holding is another key player considered to leave the club despite giving a very good account of himself in their triumph over Chelsea.

Shkodran Mustafi, Sead Kolasinac and Sokratis Papastathopoulos may not be a part of Arteta's plans beyond this campaign.

Arsenal will try make attempt to sell Mesut Ozil but representative revealed his client will prefer to see out his £350,000-a-week contract at the club, despite having not featured at all post-lockdown.

Legit.ng earlier reported that Mikel Arteta recorded his name in the history books by steering Arsenal to win the English FA Cup beating Chelsea in the final.

The Gunners started the encounter impressively, but the Blues took the lead at the Wembley stadium before Gabonese striker Aubameyang scored twice to give the Gunners the win.

Before joining Arsenal as head coach where he replaced Unai Emery, Mikel Arteta worked as an assistant coach to Pep Guardiola at Manchester City for three years.