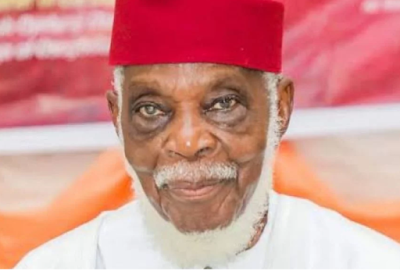 The Governors of Ekiti State, Dr Kayode Fayemi and his Ondo State counterpart, Rotimi Akeredolu, yesterday described the late Afenifere leader, Senator Ayo Fasanmi, as one of the country’s unsung heroes, saying his demise had robbed them of a “godfather and counselor”.

Specifically, Fayemi branded Fasanmi’s contributions to the development of democracy as immeasurable, particularly his role in the formation and operation of the defunct National Democratic Coalition (NADECO) that fought against military imperialism in the country.

Fayemi stated that his government is present constructing a secondary school to honour the deceased for his contributions to Ekiti, saying: “my only regret was that he has now left us before the school will be officially inaugurated for academic activities when schools finally reopen”.

Fasanmi, who was a second Republic Senator died last week Wednesday at the age of 94.


Torrent of tributes had flown as the remains of the highly venerated Afenifere leader was interred in his countryhome of Iye Ekiti in Ilejemeje local government area of Ekiti State.

Fayemi in his speech entitled: ‘Tribute to a Man of Integrity’, said what he actually admired about the deceased was his integrity, which bore eloquent testimony to immaterialistic life and added more respect to his incorruptible nature.

“His death has, therefore, robbed me of a godfather, counselor, an advocate and a father. A good man has left us. We will sorely miss him, but we are consoled that Baba’s entire adult life was dedicated to selfless service”.

Fayemi added that Baba belonged in the class of the youths of the 1950s when the nationalist movement was at its feverish peak, and got indoctrinated into nationalism struggle through the forceful writings of Dr. Nnamdi Azikwe and his contemporaries who used the instrumentality of the media to etch an indelible impression on the minds of the young students of that era.

“He proved his political mettle in 1964 when he was elected as a member of the Federal House of Representatives before the military struck in 1966 and he got imprisoned in Agodi Prison before he was later released.

“By the time democracy returned in 1979, he was a major participant in the politics of that time in the old Ondo State. He offered to serve as governor of the old Ondo state in 1978 and slugged it out with Chief Michael Adekunle Ajasin who defeated him in the primary.

“He eventually went to the Senate along with other iconic Ekiti bests such as Prof. David Oke and Prof Banji Akintoye where they distinguished themselves and became exemplars.

“One legacy for which Baba would be fondly remembered was his credential of incorruptibility. He was a man of tall integrity and honesty. It would be recalled that he was the first to start the Anti-Bribery and Corruption Committee in 1973 under Col. Oluwole Rotimi of the Western Region.

“He would go round roads and highways to arrest police and other enforcement agencies who were collecting bribes on the roads, in his determined commitment to stamp out corruption in Nigeria”.

“Chief Ayo Fasanmi has come, he has seen and conquered. He conquered human cravings, vanity of power, ostentation, greed and malice”, he said.

The All Progressives Congress National leader, Asiwaju Bola Ahmed Tinubu, who was represented by former Lagos Deputy Governor, Prince Abiodun Ogunleye, said Nigerians should learn from the late politician who lived a modest and spartan lifestyle.

Tinubu described Fasanmi as a civilian revolutionist and a politician of outstanding mien, civility and character, who is worth being emulated.

Speaking on behalf of the Southwest Governors, Arakunrin Rotimi Akeredolu of Ondo State, said the news of the passage of the Icon was a loss to Yoruba race and Nigeria at large.

“He was not petty, but he spoke truth to power. He lived a remarkable life, and he was one politician who became Senator and came home to rest later. Let politicians of today learn how to be contented and allow this remarkable conduct to guide us”.