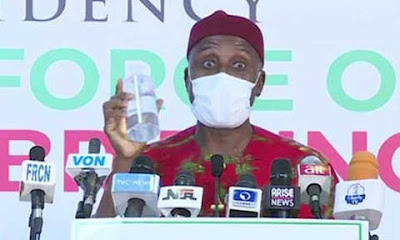 Minister of Justice and Attorney General of the Federation, Abubakar Malami today joined Minister of Transportation, Rt Hon. Chibuike Rotimi Amaechi to set the records straight on Nigeria’s sovereignty not being at risk in the country’s loan agreements with China.

He said the misconception is that the National Assembly is looking at the diplomatic immunity as against the commercial immunity of a country when it has to do with loans, adding that there is no concession whatsoever made as it concerns Nigeria’s diplomatic immunity.

“But when you talk of immunity within the context of commercial sense, that is where I think we need to clarify issues with particular reference to the loans and commercial transactions among nations.

“Concessions relating to immunity for the purpose of provision of commercial guarantee are a normal, traditional ritual. Nations enter into respective interstate agreements and in the course of so doing, surrendering their jurisdictional immunity.

It is on account of that for example that you see Nigeria signing an agreement with other institutions or nations and agreeing to a choice of territorial jurisdiction for the purpose of determining disputes when they arise. So that is how eventually you see Nigeria submitting to jurisdiction for determination of a trade dispute in UK, in Paris and in other international fora or jurisdiction even when Nigeria as a nation has diplomatic immunity.

“And now that brings you to commercial immunity. The context and the implication of a commercial immunity or sobriety. It’s indeed embedded in an appreciation that country A requests for a loan facility from country B and then country B is entitled as a matter of right to extract a commitment, an understanding that at the end of the day, the loan advance will eventually be paid. So it is indeed a concession and sobriety, giving an undertaking, providing a guarantee for repayment of the facility when the need arises.

“So commercial immunity is in essence a mere guarantee that allows an advancing state an opportunity, right and power to claim back the financial advances made to a party state and that in its own right is indeed to an asset for the purpose of repayment of the loan.

It is in no way extended to perhaps concession to diplomatic immunity by which you now surrender the rights, privileges and independence of a nation state. But it is a commercial term that is restrictive, exclusive to an asset, a commercial asset for that matter in the event of default,” Malami said.

The AGF added that the clause is a mere guarantee, a commitment that allows an advancing state (the lender) the powers to claim back an asset for the purpose of repayment of a loan and is in no way connected to the sovereignty of a country.

“The bottom line is to appreciate the difference between International diplomatic immunity which in its essence and right is an immunity relating to the independent existence of a state, and a commercial immunity which in essence is a commitment that you are now conceding that in the event of default of payment of an advanced amount of money, you will have the right to now attach the commercial asset of a borrowing state for the purpose of satisfaction.

So that is where I think the misconception set in. Misconception to the effect that the National Assembly is in essence looking at the international diplomatic immunity as against commercial immunity which in its own right is operated only to guarantee the repayment of the advanced loan,” he stated.

On his part, Minister of Transportation, Chibuike Amaechi again dispelled the notion that Nigeria’s sovereignty has been signed off to China in obtaining the loans.

Amaechi said the previous administration cannot even be blamed for the loan or clause in the agreement because it is a standard clause.

“We will not blame President Goodluck Jonathan’s government for taking the loan, because like I said, it is a standard clause in every loan agreement. That clause enables the lending country to go to arbitration. It creates an avenue for them to be able to retrieve their funds in the case of a default. If therefore there’s an asset that has been mortgaged, they must be able to get to that asset. If you don’t waive that immunity, they cannot. It’s a standard clause in every international loan agreement.

“If the National Assembly says we have signed out the sovereignty of our country, so why did they approve? Didn’t they see it before approving.