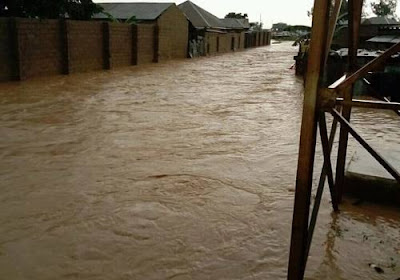 Following the flooding in parts of the Gwagwalada Area Council which claimed five lives, the Federal Capital Territory Administration has commenced the demolition of about 102 houses built on the waterways and flood plains.

The buildings were said to have been marked for demolition over a year ago.

Speaking to journalists on Tuesday, FCT Deputy Director, Monitoring and Enforcement, Department of Department Control, Garba Kwamkur, who led the exercise, explained that the occupants of the affected houses were given enough time to move out of the flood-prone areas but they had refused to obey the directive.

The deputy director said, “The University of Abuja had written to us about the encroachment issue. The settlement here that is due for resettlement has grown beyond its boundary.”


“And we had the issue of flooding last week, where five persons carried away by the flood, were confirmed dead.

“We actually had to discuss with the village leaders on the need to move away from the flood-prone area.”

Kwamkur added, “The FCT Emergency Management Agency has also predicted that there would be heavy flood this year.

“So we are taking some precautionary measures; that’s why all the buildings along flood plains will have to go. All the contravention notices have been issued since 2019.”

Responding, the Chief of the community, Isah Egari, said that he was not opposed to the demolition but he appealed to the FCT Administration to give the residents more time to move out of the community.