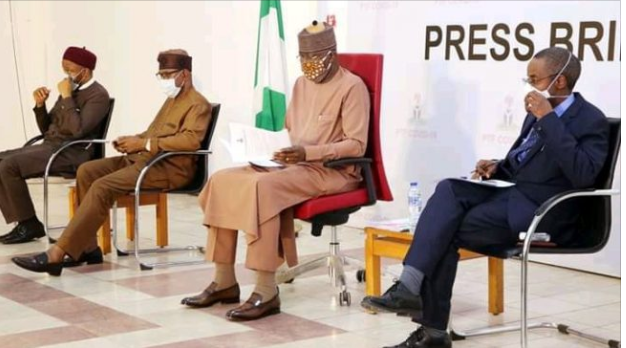 The Chairman of the Presidential Task Force on COVID-19, Boss Mustapha, on Wednesday, attributed the low figures recorded in the areas of testing and confirmed cases of COVID-19 over the past few days to the public holiday declared to mark this year’s Eid-el-Kabir.

He also identified fatigue on the part of workers as part of the factors responsible for the low figures.

Mustapha, who is also the Secretary to the Government of the Federation, stated this in an interview with State House correspondents after he led members of the task force to present its interim report to the President, Major General Muhammadu Buhari (retd.), at the Presidential Villa, Abuja.

Mustapha said the President was happy with the report presented and that he commended members of the task force for their efforts in creating awareness on the virus.

The PTF during a briefing on Monday, July 27, announced the extension of the current phase two of eased lockdown.

With the extension, the phase which was initially scheduled to end on July 29, will now end Thursday, August 6.

Briefing newsmen on Wednesday, the SGF said the PTF would release fresh directives tomorrow once the President endorses its recommendations.

“As for the content of the report, it will be premature for me to talk about it because we submitted a report, we have submitted recommendations and so we have to leave for Mr President to take a decision.

“By the time I receive his approvals, non-approvals on the recommendations we have made, we will be able to speak to the Nigerian people tomorrow (Thursday),” he explained.

The SGF added, “If you noticed, as we celebrated those discharges, there has also been a decrease in the testing.