My father is still an Okada man, all the promises were fake - Viral school girl Success Adegor says in new video 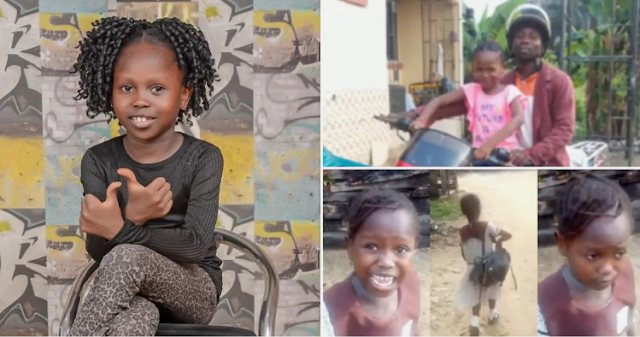 Success Adegor, the young girl from Delta whose reaction to being kicked out of school in 2019 went viral online, says the monetary promises made to her family were all fake.

Last year, the primary three pupil of Okotie Eboh Primary School in Sapele, was sent home for non-payment of fees but she angrily told a neighbour she would have preferred being flogged.

The video, wherein she had been recorded making the outrageous comments not typical of a girl her age, had attracted attention on social media, thereafter bringing unexpected perks to her family.

However, in another clip that surfaced on Twitter on Thursday, the schoolgirl claimed that much of the monetary promises made to her by prominent public figures have remained unfulfilled.

Conversing with yet another lady, Adgbor, who spoke in Pidgin English, stated that her father is still a motorcyclist while the job which was given to her mother had not been made official.

“No. Everything na fake. Everything wey dem say dem don give ds wan and dat wan na fake. Dem no give my daddy any job. I still be Okada man pikin wey I be. My mummy sef, the job wey dem even give her, them no dey pay her. Them just tell am say e name never dey paper, give am N10,000 make e take hold hand,” the young girl can be heard saying.

“Which kind yeye thing be that? Na only primary four and six scholarship All these people. They be fake. Promise and fail. If you know say you no fit fulfill anything, no just promise.”

“My father is still an Okada Man, All the Promises were all F a k e and the millions donated to us was just Audio money”- Success dem go F l o g tire C r i e s out 1year after Nigerians Were led to believe that she and her family were now Multi Millionaires!!!

It was earlier reported that Mr. Jollof, a popular social media celebrity, registered her at a private school in Sapele and paid the fees for two terms, promising to fund her education up to college.

It was also said that Eugene Inoaghan, the chairman of the Sapele LGA, offered her scholarship and the private secretary to Governor Ifeanyi Okowa met her family on behalf of the state government.

The initial video that brought her to limelight:

Who knows this little girl? Please hit me up. Nobody go flog you and we go find way pay if na School fees one cause quarrel.