UAE vice president and ruler of Dubai spotted riding bicycle around emirate with aides, here is what they did by the roadside later (photos)

- Sheik Mohammed, who is the vice president of the United Arab Emirates and ruler of Dubai led a group of almost 20 men cycling around the emirate

- The men, who wore face masks and helmets, used a dedicated cycling path during the exercise

The vice president of the United Arab Emirates and ruler of Dubai, Sheik Mohammed bin Rashid, has been spotted cycling around the emirate.

The National reports that Sheikh Mohammed cycled around Dubai with his aides before stopping to pray by the roadside.

Legit.ng notes that the Dubai ruler and his aides used a dedicated cycling path. 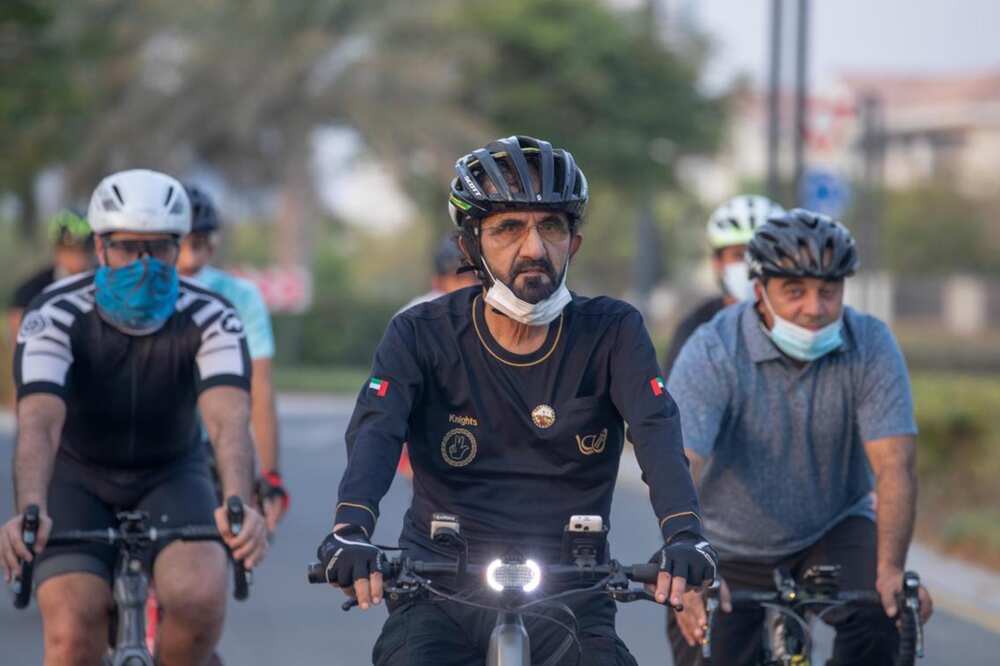 The Dubai ruler was later seen stopping to look over the canal near the water fountain fixture on Sheikh Zayed Road bridge.

The crown prince of Dubai, Sheikh Hamdan bin Mohammed, also took to his Instagram page to share an image of his father cycling around the emirate.

Videos later emerged of Sheikh Mohammed and his aides praying on a sandy roadside in a residential area.

In other news, the United Arab Emirates has denied restricting Nigerians from travelling to their country.

The country in a statement posted on its embassy Twitter page in Nigeria said it made this clarification after reports surfaced on social media concerning the issue.

Meanwhile, Legit.ng previously reported that a Nigerian lady identified as Nwando Onwurah took to social media to flaunt her achievements from childhood to adulthood in a bid to inspire others to embrace hard work.

On her LinkedIn page, Onwurah posted two pictures of herself, one was when she was a child and the other as an adult

In the childhood picture, she could be seen posing with her academic awards, while the recent picture showed her posing with the award given to her at her place of work.

She noted that the award given to her at her place of work was not a just a testimony of her hard work but the foundation laid by her parents and teachers.

Chelsea striker, Timo Werner, has said he is “absolutely unhappy” with the team’s performance, following their 3-3 draw with West Brom on Saturday. The Blues went