Nollywood actress Regina Daniels has shared another video on her YouTube page and this time, she revealed the face of her lovely son Prince Munir Nwoko.

The video started with a scene showing Munir being photographed with his mother. The new mum who couldn't contain her excitement at the fact that she now has a son, was all over him as she nudged him to wake up.

Another scene showed billionaire Ned Nwoko carrying his newborn while Regina walked behind him as they alighted the stairs together.

Then they sat on a sofa and talked about their son. The billionaire businessman did most of the talking as he shared some vital things about his son. 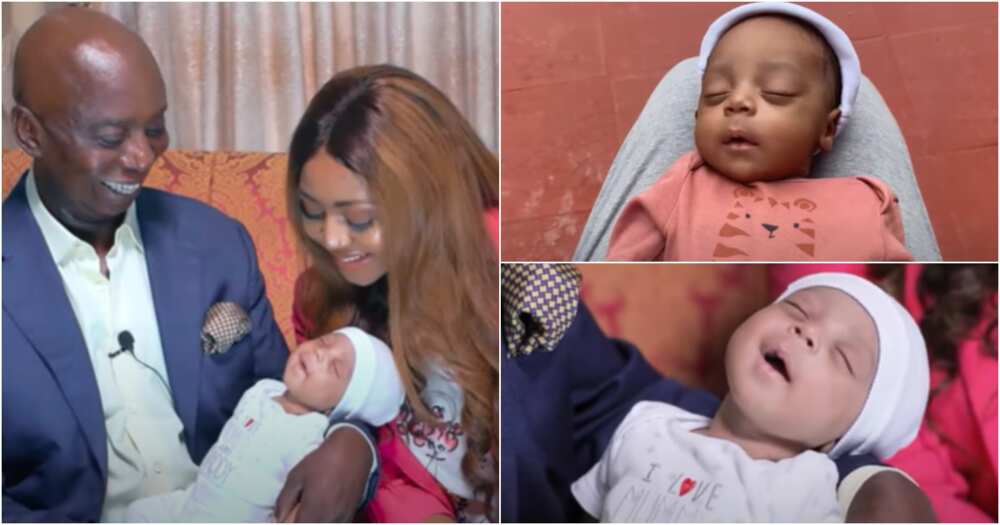 According to him, when the actress was pregnant, they argued about who the son would look like. He noted that they still argue about that despite the fact that his face changes by the day.

Meanwhile, Nwoko stated that he thinks that Munir looks like him because he looks like his other children, however, he noted that the little boy takes some of his mother's features.

The couple also talked about the fact that their son smiles a lot. According to them, he hardly cries or stresses his mother. True to their words, Munir was seen many times, smiling as he slept peacefully.

The billionaire businessman stated that he loves to spend time with his son just like he did with the other children. According to him, every morning, he takes him out so that he can get some Vitamin D and fresh air.

As soon as he said that, the actress stated that she feels that he takes her son outside to make him dark like him.

In other news, Legit.ng earlier reported that Regina Daniels shared a video of son's name tattooed on her wrist.

In a video she shared online, Regina showed Munir's name with another drawing of a love symbol around it.