Cameroon became the first African team to reach the quarterfinals of the FIFA World Cup championship in 1990.

The Indomitable Lions were dumped out of the competition by England after suffering a 3-2 defeat in a game that stretched into extra minutes.

And since then, they have waited for the promises made to them by the government for the extra-ordinary feat they achieved about three decades ago.

The 83-year-old Head of States is now ready to fulfill his vows to the history makers as reported by Journal de Cameroon. 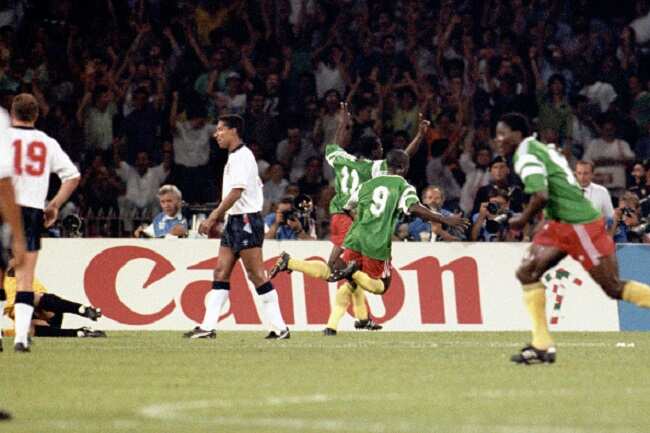 Reports claim that the state's official TV Channel CRTV confirmed on August 6 that the president will hand the former players their promise. The gesture would be to thank them for doing the country proud.

Roger Milla who scored four goals in the 1990 edition of the championship was said to have conveyed the president's message to his former teammates.

While reacting to the news, 56-year-old former defender, Jules Denis Onana, appreciated the president for redeeming his vows towards them.

After their exceptional course at the 1990 World Cup competition in Italy, the Head of State had promised to offer them each a modern house to congratulate them for the exploit.

Meanwhile, a few players like Louis Paul Mpede, Benjamin Massing and most recently, Stephen Tataw have passed away.

But, according to Denis Onana, procedures are on to make sure their beneficiaries benefit from the grant.

Legit.ng earlier reported that former Super Eagles coach Christian Chukwu has explained that the trio of Celestine Babayaro, Yakubu Aiyegbeni and Victor Agali caught with women at the 2004 AFCON in Tunisia.

The Super Eagles traveled to Tunisia in 2004 with Nigerians hoping that they would bring back the AFCON title which they failed to win.

Nigeria even started the competition badly losing against Morocco in the first game which made all the Super Eagles fans angry.