I’m yet to receive Olympic gold medal we won in 1996, says ex-Nigerian coach 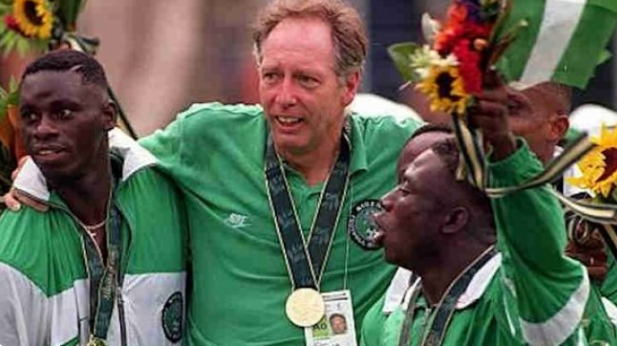 Johannes-Franciscus Bonfrere, a former Nigerian coach, says he is yet to receive his Olympic gold medal 24 years after he lead the Dream Team to gold in Atlanta, US.

The Dutch tactician was in charge of the Nigerian under-23 football team that won Africa’s first-ever Olympic football gold medal in 1996.

The team defeated Brazil 4-3 in the semi-final before beating a very coordinated Argentina side 3-2 in the final.

In an interview with BCOS TV, the former Super Eagles coach said he is yet to receive his gold medal after leading Nigeria to the glorious outing in the US.

Bonfrere said he was prevented from mounting the podium after the win against Argentina, on the excuse that his gold medal was not available.

“I have not been given the Olympic gold medal we won in 1996. After we celebrated our victory over Argentina at the final, I was prevented from climbing the podium to receive my medal,” he said.

“They said mine was not available. I was annoyed and refused to return with the team to Nigeria. I went to Holland instead. It is unfair that after bringing glory to Nigeria, I was denied of my rewards.”

In June 2018, Babatunde Fashola, minister of works and housing, had handed over the keys of a house allocated to Bonfere by the federal government.

This was done in fulfillment of the government’s pledge to him 26 years ago for winning the 1994 African Cup of Nations.