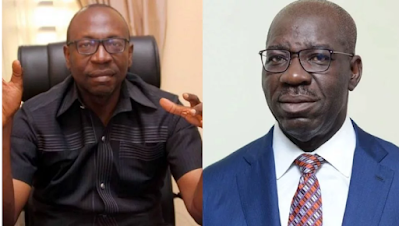 Osagie Ize-Iyamu, the All Progressives Congress (APC) governorship candidate in Edo State, has alleged that Governor Godwin Obaseki-led government does not honour monarchs.

NAN reports that the flagbearer spoke at a rally at Igueben on Monday.

“When I become governor, I will give due respect to traditional institutions. I don’t think the present administration has accorded the traditional rulers any due honours,” he assured.

Ize-Iyamu also alleged that the Ambrose Alli University (AAU) was being underfunded.

Noting that the only state investment in Esanland is AAU, he said, “the institution used to get about N250 million as state government subvention when Adams Oshiomhole was governor of the state.”

Ize-Iyamu stated that the Obaseki administration “has reduced the subvention to N96 million which can barely pay staff salaries.”

The candidate promised to tackle the security challenge in Esanland.

He promised adequate funding and partnership with traditional rulers and local vigilantes.

“Traditional rulers must be involved in governance and their suggestions must be taken seriously. I want to be the Governor that the citizens will know, can call.”