How we pushed Boko Haram out of north-east - General Buratai

- The chief of army staff, Tukur Buratai has said that Boko Haram terrorists have been pushed out of all the north-eastern states, except Borno

- Speaking at the meeting, Buhari said the government is coordinating with civil and traditional authorities in a bid to improve security

The chief of army staff, Lt Gen Tukur Buratai has said that Boko Haram terrorists have been pushed out of all the north-eastern states except Borno.

The army chief made the statement on Monday, August 10, at a security meeting with President Muhammadu Buhari, according to a statement issued by a presidential publicist, Garba Shehu. 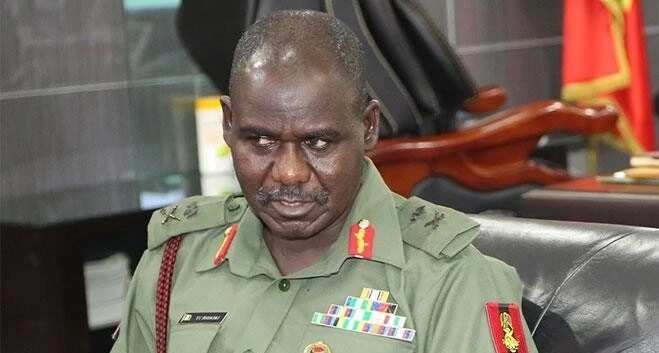 “There are no Boko Haram terrorists in neighbouring states. They have been pushed out, and now cornered in Borno state," the army chief reportedly said.

Speaking at the meeting, Buhari said the government is coordinating with civil and traditional authorities in a bid to improve security in the country.

He promised that his administration will not relent in its efforts to secure the lives and properties of Nigerians.

Meanwhile, the Nigeria Police should be empowered to use heavy artillery. The call was made by governors of Northeast states According to the governors, this will help bridge the manpower deficit in the Armed Forces.

This is contained in an eleven points communique issued by the northeast governors’ forum at the end of its second meeting held in Maiduguri, Borno state, Channels TV reports.

They also called on the federal government to deploy state of the art military hardware to the region.

In another news report, Mike Ejiofor, the former director of the Department of State Services (DSS), has said that replacing Nigeria's service chiefs will not solve the security challenges in the country.

Ejiofor who disclosed this during an appearance on Channels Television’s Sunrise on Saturday, August 8, said though the heads of security and intelligence agencies have done their best, however, it is not yet enough.

According to him, if the service chiefs are replaced now, there won't be any change. The former DSS boss also said that the military and security services are ill-equipped.

He went on to note that President Muhammadu Buhari who is the Commander-in-Chief of the Armed Forces is the only person authorised to change the service chiefs.