Former Super Eagles winger, Nigerian international John Utaka, has opened up on how Kanu Nwankwo and Austin Okocha helped after getting his debut national team call-up twenty years ago.

The 38-year-old scored six times in 49 appearances during his 12-year reign with the Super Eagles.

He had watched both Kanu and Jay-Jay on television when they helped the country win the Olympics gold medal in Atlanta in 1996.

Utaka's invitation to the national team was inspired by his impressive performances for Egyptian club side Ismaily.

Meanwhile, after getting a chance to play for the above-named duo, he told Montpellier website: “Kanu competed in the Olympic games. He inspired me a lot because he was not a fast player but he is very smart and very technical in games.

“When I got my first call-up to Nigeria in 2000, he was there with Okocha and for me it was… I was watching them on TV and there I was playing with them. It was a dream fulfilled.

“They encouraged me by telling me not to be afraid to express myself, as I knew how to do and especially to listen to the coaches. It was good advice.”

Utaka added that: “There are lots of expectations when playing for Nigeria. We are about 180 million in population and almost everyone loves football.

“In each match, there is always immense pressure for the XI who starts the match. Every time I wore this jersey I knew there was no room for errors.

“Above all, you have to give your all whether we win or lose. We have to play well because the fans don’t forgive. It is very important you give it your all when playing for Nigeria because there is a lot of criticism.”

On his return to Montpellier from Portsmouth in 2011, the 38-year-old helped La Paillade win the French League title - scoring 12 goals in 68 appearances in the process.

“I think it was a collective strength. We could score in any way. Sometimes Mapou could score, other times it was Vito. It was not just one player even if it was obvious Olivier,” he added. 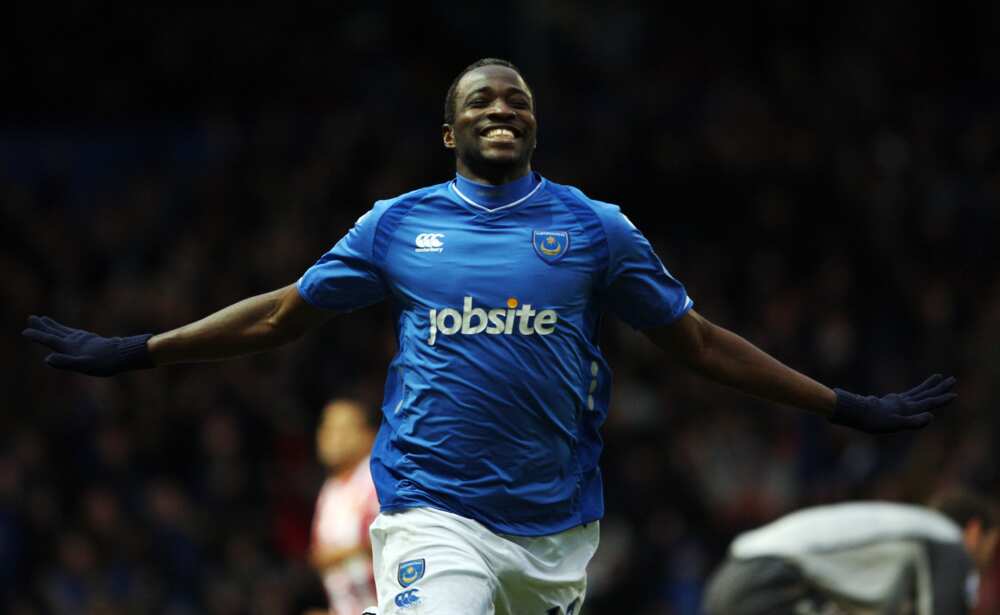 John Utaka celebrating one of his goals during his time at Portsmouth. Photo Credit: Getty Images
Source: Getty Images

“Giroud did us a lot of good. He was like a scoring machine. When we make an effort to give him the ball he finishes well and we were the champions of France.”

Utaka last played for Sedan before finally hanging up his boots in 2018.

Legit.ng earlier reported ex-Nigerian international John Utaka has returned to his former club in France, Montpellier, to kick start his career as a football coach.

Utaka played for the club between 2011 and 2013 where he scored 12 goals in his 68 appearances in all competitions.

The 38-year-old has now returned to Stade de la Mosson with the ambition of earning his coaching badge in the Ligue 1 club's youth set-up.