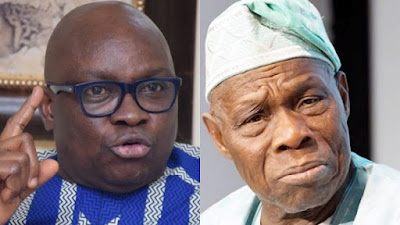 Fayose explained that he would send Obasanjo back to prison if he becomes president for alleged grievous infractions committed against Nigeria.

He vowed to ensure the former president gives account of all the alleged fraud carried out during his eight-year tenure as president.

Fayose, who spoke while featuring on “Plus Politics”, a programme on PlusTV Africa, disclosed that Obasanjo was not a saint.

The former governor disclosed that Obasanjo had asked past governors to contribute N10 million each for the construction of his library.

He charged Obasanjo to disclose how he got the money to develop Ota farm where he resides.

Fayose also alleged that the former president tried to push for a third term.

According to Fayose: “Let me tell you, Obasanjo has made hate speech and should be brought to book by this government. I pray one day I will become president of this country by God’s grace. Obasanjo will go back to prison. I’m telling you the truth because there are so many things Obasanjo must be questioned about.

“Obasanjo is not a saint when he came out of prison his farm at Ota was in shambles. But, today, it is back to life. Where did the money for resuscitating the once ailing farm come from? It was from the government.

“For the library, all governors at that time contributed 10 million naira each to support Obasanjo by force. The third term is still fresh in our memory.”