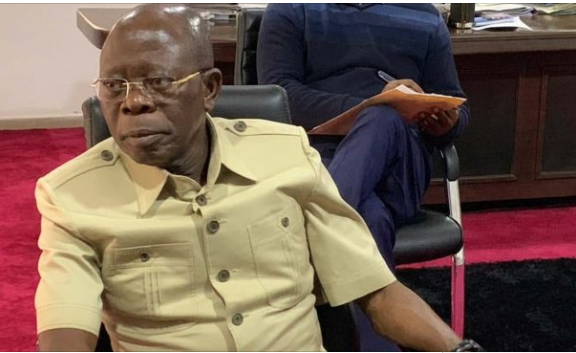 An FCT High Court in Abuja, on Tuesday, restrained the Edo government from publishing any defamatory materials against the former National Chairman, All Progressive Congress (APC), Adams Oshiomhole and a businessman, Capt. Idahosa Okunbo.

Justice Suleiman Belgore (vacation judge) gave the order following an exparte application filed by Okunbo and the Edo Attorney-General and Crusoe Osagie, the Special Adviser to the Edo State Governor on Media and Communication Strategy.

Belgore, in granting the order said: “This application upon a calm consideration of the 10-paragraph affidavit and the nine exhibits attached and the arguments of counsel both orally and written is hereby granted as prayed.”

He then adjourned until Aug. 18 for a hearing of the motion on notice, NAN reports.

He also prayed for an interim order restraining the Edo government whether acting through the first defendant or second and their representatives or any other person however described.

“From publishing or circulating, “Okunbo, Oshiomhole was making plans to disrupt Edo governorship election” and other related defamatory publications by any means.

He further required an order restraining the defendants by themselves or any other person from causing to be published, circulating, further publishing, reporting or publicising the publication captioned.

Okunbo further sought an order granting leave to him to effect service of the originating processes on the suit on the defendants by substituted means by publishing in a widely circulated national daily newspaper and to deem it the same as good and proper service.

He further sought an order granting him leave to serve further and other processes in the suit on the defendants by substituted means by publishing the same in a national daily newspaper until they cause the appearance to be entered on their behalf.