- The guidelines mandate broadcast stations not to commercialise political news

Legit.ng recalls that NBC created a furore after issuing a fine on Nigeria Info 99.3FM, a popular radio station in Lagos state.

Coming on the heels of a comment made by a former deputy governor of the Central Bank of Nigeria (CBN) Obadiah Mailaifa, NBC said it was concerned with "the unprofessional conduct of Nigeria Info 99.3FM, Lagos, in the handling of the Programme, “Morning Cross Fire."

Mailafia, while speaking on the radio on August 10, 2020, had claimed that a governor is contributing to the festering insecurity in the country by providing financial and moral support for the Boko Haram terrorists and bandits.

In a subsequent development, NBC has warned broadcasting stations against using their platforms to promote violence-inciting political jingles. 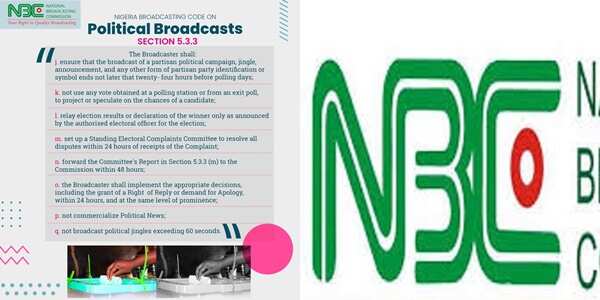 NBC gave the warnings in the wake of the fast-approaching governorship election in Edo and Ondo states.

The elections in the state have been scheduled to hold in September and October 2020 by the Independent National Electoral Commission (INEC) respectively.

Here are the guidelines released by NBC based on the Section 5.3.3 of the commission:

1. Ensure that the broadcast of a partisan politicians campaign, jingle, announcement, and any other form of partisan party identification or symbol ends not later than twenty- four hours before polling days;

2. Do not use any vote obtained at a polling station or from an exit poll, to project or speculate on the chances of a candidate;

3. Relay election results or declaration of the winner only as announced by the authorised electoral officer for the election;

4. Set up a Standing Electoral Complaints Committee to resolve all disputes within 24 hours of receipts of the Complaint;

6. The Broadcaster shall implement the appropriate decisions, including the grant of a Right of Reply or demand for Apology, within 24 hours, and at the same level of prominence;

7. Do not commercialize Political News;

Falana described the fine as illegal and further added that the amended code under which the radio station was sanction has not got a solid legal backing.