The police have arrested one Aminu Farawa in Kano state for locking up his 30-year-old son, Ahmed Aminu, inside his car garage for seven years.

A statement released by Abdullahi Haruna, the spokesperson of the Kano state police command on Friday, August 13, indicates that the victim has been rescued and admitted at the Murtala Muhammad Specialist Hospital in Kano for proper treatment, Channels TV reports.

Aminu explained that he locked up his son after suspecting him of drug abuse. 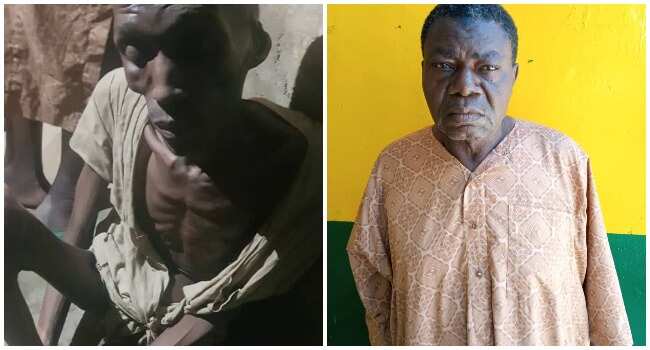 Legit.ng gathers that the state’s commissioner of police, Habu Sani, has ordered the transfer of the case to the State Criminal Investigation Department for further investigation.

The victim, Ahmed, has lost his physical strength and was emaciated when he was rescued.

An account of the incident by The Guardian states that Ahmed was subjected to indefinite home arrest by his father and stepmother after discovering his addiction to an illicit substance.

Ahmed was rescued following the intervention of a human right group that discovered his condition and alerted the police.

“We discovered that the father and his stepmother lock him up for several years.

“When we got the wind of this we quickly inform the police. Even when the police get to that house the parents still denied Aliyu was not at home until thorough search was carried out and Aliyu was rescued from his cage.

“We learnt his parents will not feed him and Aliyu would sometime spend days without food and water such that he would have to eat his faeces and drink urine," a human right activist, Shehu Ibrahim, was quoted to have said.

In other news, a 70-year-old man named Mati Audu has been sentenced to death by stoning for defiling a 12-year-old girl.

Audu was convicted on Wednesday, August 12, by an Upper Shari’a court in Kano after pleading guilty to the offence.

Legit.ng gathers the presiding judge, Ustaz Ibrahim Sarki Yola, passed the judgement after Audu confessed to have committed the offence in three different sessions of the court.