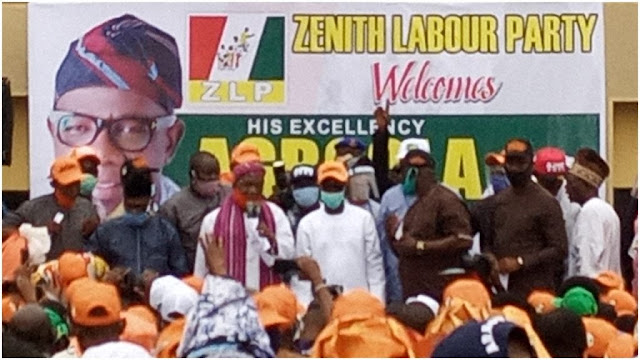 Ajayi, who resigned from the Peoples Democratic Party on Monday, made the announcement on Friday at the ZLP Secretariat in Akure, the state capital.

He was welcomed by the party’s leadership and faithful from the 18 Local Government Areas of the state.

Hitherto the formal defection, Ajayi had been adopted as the candidate of the party for the forthcoming governorship election in October.

Addressing the party faithful, the deputy governor said his contesting under the ZLP was to change the political narrative of the state, declaring that there would be no room to rig the forthcoming election.

He said, “I can assure you that nothing will happen on the election day, we all own this state. We have joined this party to change the narrative. We are going to make a change in Ondo State.

“They will want to rig the election, but what they are planning is not going to work. It is obvious that the affirmation of Governor Akeredolu as the candidate of the APC coupled with the seeming failure of the PDP to produce a dependable and formidable alternative has dampened the democratic enthusiasm and morale of the people.

“To stir hope and rechannel the energy of the progressive electorate, I am teaming up with members of the ZLP, a chunk of most of the other members, and my teeming allies from both the PDP and APC.”

Welcoming the defectors, the state chairman of the party, Mr Joseph Akinlaja, affirmed that the deputy governor was the candidate of the party in the October 10 governorship election in the state.

He urged the defectors to go to their various wards and local governments to work for the party and its candidate.

Akinlaja noted that Ajayi had registered for the party in his Apoi Ward 2 in Kiribo Ese Odo Local Government.