- A Nigerian man, Oluwadamilare Dauda, put smiles on the faces of his daughters as he got them bicycles

- Many who responded to his tweets commended his effort, that he has done well by his children

A Nigerian father, Oluwadamilare Dauda, has said that though he is not Femi Otedola, he got bicycles for his two daughters.

In his tweet on Wednesday, September 16, the young man said that Ferrari is loading as a show of faith in the things he could do more if he were as rich as the billionaire father.

His post is in response to Otedola who recently served an "unmatchable" Daddy goals as he bought a Ferrari each for his three daughters.

The Ferraris also came in different colours that seemed to suit the personalities of each daughter.

In the picture he shared, his daughters could be seen on their bicycles as one of them fumbled with her bike's handbrake.

The post has generated massive reactions from tweeps as many of them had a lot to say. Most of the reactions were really funny. 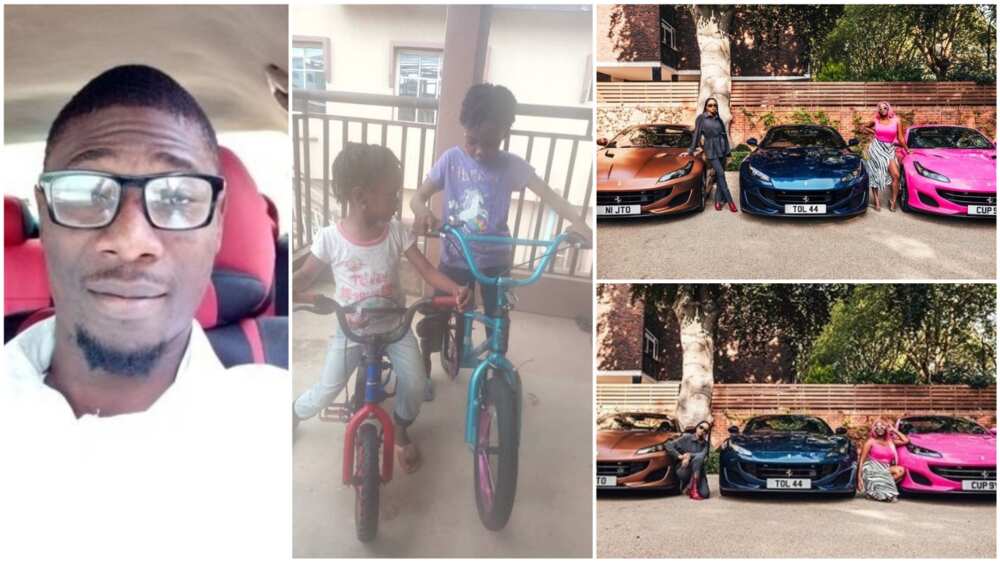 A collage showing the dad, his daughter and the Ferarri for the Otedolas. Photo source: Twitter/Dauda/DJ Cuppy
Source: Twitter

Read the reactions below:

@g_c_world said that there are actually many fathers out there who are not available to face their responsibilities.

@Halfourlabi said he has done great, telling him if he could do this little, he would also buy Ferrari someday.

Others gave him some other forms of support.

@suru_williams said: "Your own good my wife just sent me pictures of 2 different baby walker say make I choose say make we buy am lol and month end still far"

@kratoshispus said that he started from a very good place as he prayed, saying: "May you not falter to do more, even amidst trying times; you would still give in resonance to what you have placed in your heart ❤️.". He also called him a strong man.

@OgwuMartin said he is still waiting for the bicycle his parents promised him if he came first in school, a thing he achieved.

Since the news of Otedola splashing millions on Ferraris for his daughters broke many have flooded their individual pages with mixed reactions.

Nigerian celebrities who are known for their luxury lifestyles were not left out as they were also taken by surprise with Otedola’s audacious gifts.

Among those who reacted were top music executive, Don Jazzy, Peter Okoye and even Davido, who prayed to same for his daughters someday.