- A Nigerian with the Twitter name Safiyanu Yushau showcased his yam business, asking people to support him

- Safiyanu said that he does not farm the tubers but buys and resells them, saying he trades in Jos

A young Nigerian man with the Twitter name Safiyanu Yushau has shown that there is indeed dignity in labour.

In a post on the micro-messaging app, the Nigerian displayed his yam business as he asked people to keep retweeting so that it can get to his customers.

Attaching four pictures to his post, he held one of the tubers of yam to the camera. Other frames in the tweets show heaps of yam on display in the market.

When he was asked for his location so that people who are near him can reach him, he replied "Jos, Plateau state". 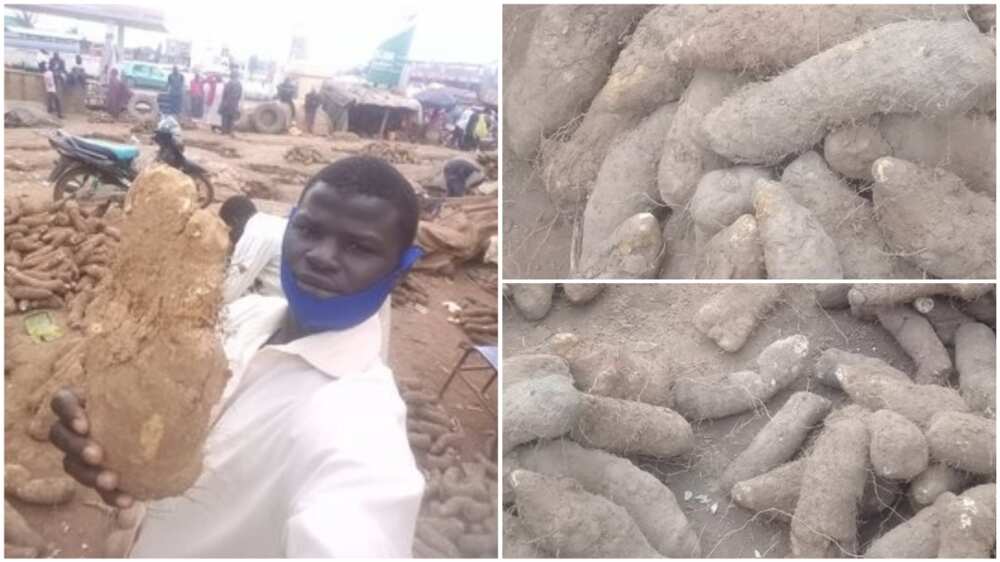 A Twitter user with the handle @celkovd tried to identify the type of yam, saying it is "Mumuye yam from Zing in Taraba state" and it "very sweet and unique specie". However, that contradicted the answer the seller later gave.

As at the time of writing this report, his tweet has over 9,000 retweets with thousands of likes to show how much reach it had.

Below are people's reactions:

There were some who prayed and highlighted the cool benefits of agriculture as a sector in the nation's economy.

Yushau was able to tell people the real name of the type of yam he has on display:

Another person with the Twitter name ANN prayed for his business.

Meanwhile, Legit.ng earlier reported that a 100-level Nigerian student identified as Jimoh John Yakubu took great honour in his work as he shared it on Twitter on Sunday, August 9.

Yakubu said that pap making is his hustle and it is what pays his bill as well as his school fees at National Open University of Nigeria (NOUN).

The 21-year-old entrepreneur and an Ado Ekiti resident added that he makes the pap in different varieties.

In the photos attached to the tweet, he could be seen standing close to prepared big buckets of the pap. Behind him is a grinder that mills the corn in the preparation process.

His post also got many positive reactions as someone even hinted at the possibility of a partnership with him.