President Muhammadu Buhari has urged security agents and election officials to conduct themselves responsibly during the Edo state governorship election.

The Nigerian president gave the advice on Thursday, September 17, in a statement issued through Garba Shehu, his senior special assistant on media and publicity. Buhari also called on political parties and their candidates to comply with democratic standards during the election.

He reiterated his stance for the Edo state governorship election to be free and fair.

“I am passionately committed to free and fair elections, but my own commitment is not enough if other actors at ground zero refuse to abide by the rules,” Buhari said. 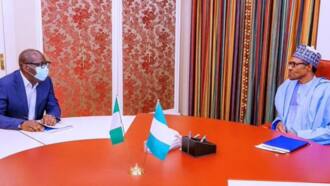 He said his desire for the democratic standards in the country to be raised higher cannot be achieved when politicians resort to do or die politics.

The president described the do-or-die mentality to politics as a threat to free and fair elections in the country.

He pointed out that such a mentality is more focused on winning than caring about a fair outcome that reflects the will of the people.

Buhari stated that election officials and security agents should be neutral.

He pleaded with all political parties and their candidates to behave peacefully during the poll.

Meanwhile, the governor of Edo state, Godwin Obaseki, has praised the call made by President Muhammadu Buhari for a peaceful and credible governorship election.

Obaskei's special adviser on media and communications strategy, Crusoe Osagie, disclosed this in an interview with the News Agency of Nigeria (NAN), on Thursday, September 17, in Benin. 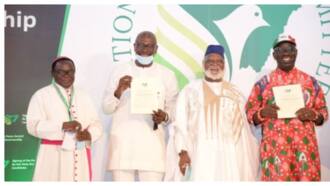 What will happen to you if Edo guber turns violent - Abdulsalami warns Obasseki, Ize-Iyamu

According to him, President Buhari’s call is a re-assuring tunic that will boost voter turnout on Saturday, September 19.

In other news, the Nigerian Bar Association (NBA), Benin branch has dismissed claims that it endorsed Pastor Osagie Ize-Iyamu, candidate of the All Progressives Congress (APC) ahead of the governorship election Edo state.

Chairman of Edo NBA, Barrister Pius Oiwoh at a press conference in Benin city on Wednesday, September 16 described the claim as false, misguided and mischievous.

He said as chairman of the Benin branch of the NBA, he is prevented by law from endorsing a particular candidate as the Bar is apolitical and non-partisan.