Messi celebrates 20 years at Barca, here's total number of goals he has scored for the club since joining at age of 12

- Messi is unarguably the greatest player at the club

Lionel Messi who grew up in Rosario-Argentina arrived Barcelona on this day 20 years ago at the age of 12 having earlier played for Newells Old Boys back home.

He was a real nightmare to opponents and everyone including his coaches who were stunned by his skills and ability to dribble past older and big-sized players despite his small body size.

The sensational youngster played his first official game for the Barcelona youth team on April 7, 2001 wearing shirt no.9 and scoring in his side’s 3-0 win at Amposta – and that opened the account of arguably the greatest player of all time. Celebrations at the Stamford Bridge as Chelsea reach yet another milestone with Liverpool, Manchester City jealous

Messi went on to score a total of 89 goals in just 97 games across Barcelona youth teams starting from 2000/2001 season before his debut for the senior team C and the rest is history.

He has scored 634 goals in 731 appearances for La Blaugrana making him the highest goalscorer in the history of the club and the Spanish topflight division.

The charismatic enigma then started to increase his tally season by season scoring 38 goals in the 2008-09 season in Barca's Champions League-winning campaign.

In total, at 33, he has scored a whopping 114 goals in his 141 Champions League appearances including 8 hat-tricks in the prestigious competition.

He has won 6 Ballon d’Or awards in the course of his remarkable career. 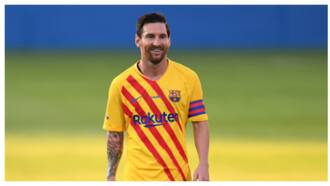 Legit.ng earlier reported that Lionel Messi has again proven to be better off than his closest rival Cristiano Ronaldo after he was named the best player of the 21st century.

In a list compiled and broken down by British news media outfit Independent, each player were given points according to how they were ranked.

And Barcelona star Messi was regarded as the best player in the history of football beating his fiercest rival Roanldo.