Popular Links: Buhari Football EFCC Boko Haram Trending Nigerian Names Politics
Home | News | General | What a wicked world! See the WhatsApp messages someone sent to this Nigerian woman just because she didn't have children (photos)
How Boko Haram insurgents are recruiting our children - Borno governor
Here are the most expensive gifts Messi bought for himself as he becomes 2nd billionaire in football (photos)

What a wicked world! See the WhatsApp messages someone sent to this Nigerian woman just because she didn't have children (photos)

- Two months after the encounter, she got pregnant and later gave birth to a son

A Nigerian woman with the name Omobolanle Adeyemo recalled a painful memory that happened to her on Monday, September 9, 2019.

Adeyemo said sharing the memory is proof of how she has been attacked and verbally shamed by people for not having children.

She said that on that very day just as she and her partner were trying to settle down in a new country and jobs, someone sent her WhatsApp messages that would later break her down emotionally.

The Nigerian woman said that a look at the messages a year after further reveals that the person could have been filled with jealousy of her achievements rather than her childlessness.

She said the person’s messages were a calculated attempt to hurt and it succeeded. Adeyemo said she started doubting God as she questioned him many times.

Things, however, changed two months after as she conceived. Some months after then, she had a bouncing baby boy.

Adeyemo said she decided to share her story with screenshots of the messages to show the person that God made her an overcomer.

The woman said she would never forgive the person until whoever the person is, reveals their identity and show remorse.

Towards the tail end of her Facebook post, she said the person also deliberately hid their gender, posing as a man. She added that she is sure the person is a woman. 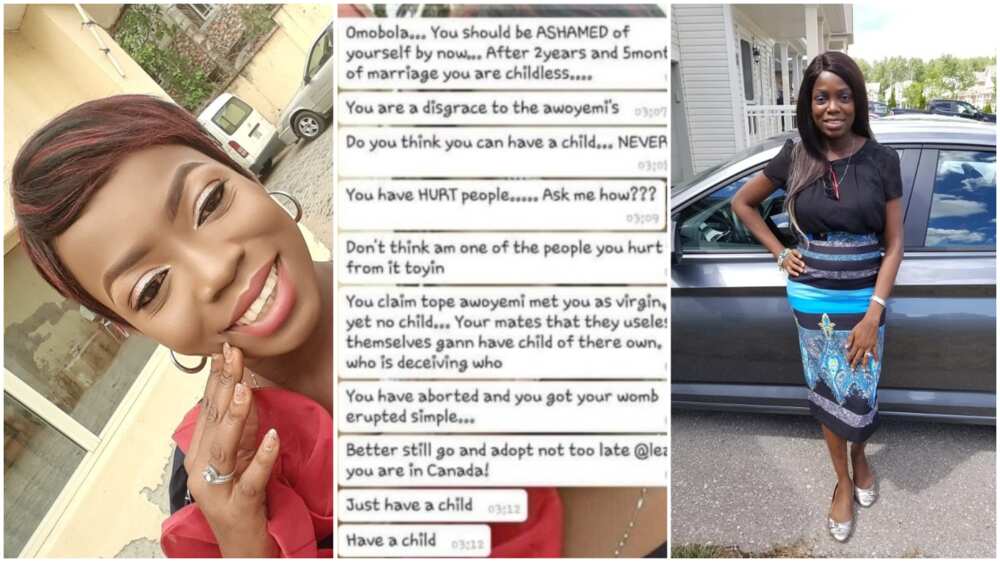 A collage of Adeyemo and a part of the message the person sent to her. Facebook/Omobolanle Adeyemo
Source: Facebook

Meanwhile, Legit.ng earlier reported that a woman with the Facebook name Oby Evelyn gave birth to a set of triplets after 14 years of marriage and trying to conceive.

In her Facebook post on Friday, June 19, she said her “mouth is full of praise of joy”, adding that nothing is as great as the moment she is in.

Evelyn said that God has used the births to compensate her for her years of mockery and shame. She added that the genders of the babies are two gi*rls and a boy.

Pastor Chris under the heat again for his sermon