Just in: Gale of defection hits PDP as highly-ranked chieftain dumps party for PDP after Dogara

- Misau said he would be forming an alliance with former House speaker, Yakubu Dogara, who defected to APC in July 2020

The gale of defection has hit the Peoples Democratic Party (PDP) in Bauchi state as a highly-ranked member of the party, Senator Hamma Misau, resigned his membership as he pitched his tent with the All Progressives Congress (APC).

Misau, who represented who Bauchi Central senatorial district in the Senate during the Bukola Saraki-led 8th National Assembly, announced his resignation from PDD after meeting with Governor Mai Mala Buni of Yobe state.

The former PDP chieftain was welcomed into the party on Friday, September 19, by Governor Buni who is the national caretaker and planning committee chairman of the ruling party at the Yobe government house where he was handed the APC flag. 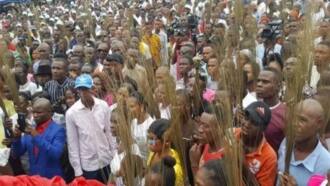 Senator Hamma Misau has made a sensational return to the ruling party. Credit: The Nation
Source: UGC

According to him, he would be forming ally with former speaker of the House of Representatives, Yakubu Dogara, who earlier departed the party.

Legit.ng previously reported that Dogara left PDP following an irreconcilable difference between him and Governor Bala Mohammed of Bauchi state.

The news came after the former speaker alongside Governor Buni met with President Muhammadu Buhari at the Aso Rock Villa, Abuja on Friday, July 24.

“I have been having a series of meetings and this (defection) just took place now in not more than 30 minutes ago. I am going to join my brother, Yakubu Dogara.

"The way the Governor (Bala Mohammed) is handling the State, there is no way we will just be watching. After all, we have promised our people that there would be a change.

"That we would be better than previous governments but all of a sudden; it is even worse than the last administration,” Misau said after his defection. 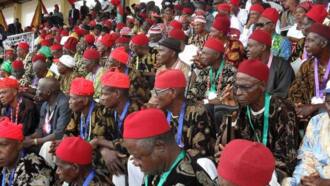 Comrade Abba Yaro, APC chairman in the state, made this disclosure and further added that the party will welcome both new and former members in time soon.