- Obaseki also cruised to victory in ward 2, Unit 2 which is the stronghold of former APC's chair John Odigie-Oyegun

Godwin Obaseki, Edo governor, has emphatically cruised to victory in his polling unit in the ongoing state gubernatorial election held on Saturday, September 19.

Governor Obaeki, who is seeking re-election on the platform of the Peoples Democratic Party (PDP), is presently having a tough run with 13 other candidates including Pastor Osagie Ize-Iyamu, candidate of All Progressives Congress (APC). Breaking: Our agent driven away, PDP voting with no security personnel on ground - APC raises alarm

In ward 2, Unit 2, which is the area of former APC chairman, Chief John Odigie Oyegun, PDP polled 109 while APC got only 40 votes. 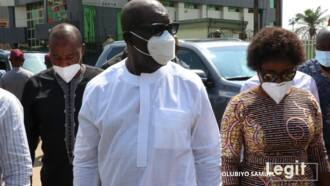 Shaibu, who is seeking reelection alongside his principal Governor Godwin Obaseki on the platform of PDP, voted at his Ward 11, unit 5, at about 10: 30 am amid loyalists.