Victor Osimhen names Chelsea legend as his idol, sends stunning message to him

- Drogba played for Chelsea in the Premier League netting many goals

Victor Osimhen who is currently on the books of Italian giants Napoli has named Chelsea legend Didier Drogba as his idol and looking forward to meet the Ivorian superstar.

Didier Drogba was truly one of the best strikers during his active playing days for Chelsea winning the Premier League title and also the Champions League.

Osimhen who is currently preparing to play for Napoli in their first game of the season explained that he has been an admirer of the Ivorian since his days in Lagos.

“Drogba would forever be my idol and I’m so grateful to him. Choosing him as a role model has really been helpful since my years growing up. “I have not met him yet and I’m really looking forward to seeing him and getting one of his signed jerseys; that would really be a dream come true for me.

“Now, playing in a club that used to have Diego Maradona, who is undoubtedly one of the greatest players ever, is inspiring.

''Maradona is an idol here in Napoli and I have seen his pictures everywhere. He is truly the best. To be here and to play on the same pitch of Maradona is another dream come true,'' Osimhen told the Caf website. Earlier, Legit.ng had reported how Super Eagles and Napoli striker Victor Osimhen stated emphatically that he is looking forward to the day his club will be facing Cristiano Ronaldo and his Juventus' teammates.

Victor Osimhen made big move to Napoli from Lille in June this year and the Nigerian has been shining in pre-season games for the Italian side. 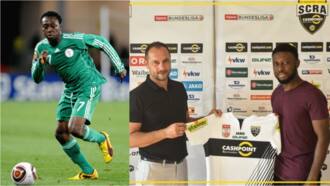 His impressive performances for Lille made Napoli chiefs to pay massive cash for his signature ahead of the coming League season in Italy.

Cristiano Ronaldo has been in great form for Juventus for the past two seasons since he joined from Real Madrid winning the League title twice.

Osimhen explained that playing against the five-time Ballon d'Or winner will be a great achievement for his career.