- The INEC conducted the governorship election in Edo state on Saturday, September 19

The deputy governor of Edo and running mate of the Peoples Democratic Party (PDP) candidate in the state gubernatorial election, Philip Shaibu, has lost his Etsako West local government.

Legit.ng reports that the former national chairman of APC and ex-governor of the state, Adams Oshiomhole also hails from the local government.

The Cable reports Independent National Electoral Commission (INEC) announced the results at 3:50 am on Sunday, September 19. Oshiomhole has since thrown his weight behind Osagie Ize-Iyamu, the APC governorship candidate in the state. 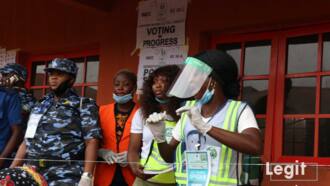 Although Shaibu and his principal, Godwin Obaseki, had contested under the APC during the 2016 election, they both defected to the PDP following the incumbent governor’s disqualification from seeking a second term on the APC platform.

Meanwhile, Legit.ng had reported that as Nigerians await the declaration of the winner of the Edo governorship election, the Peoples Democratic Party (PDP) and the former Senate president, Bukola Saraki, warned the INEC against manipulation of the results.

It was reported that the PDP accused the All Progressives Congress (APC) of mounting pressure on the INEC to alter the results of the governorship election in various parts of the state.

Saraki also cautioned INEC and security officials against thwarting the process, asking them to place the country’s glory above the ego of any politician.

Governor Obaseki and Osagie Ize-Iyamu of the APC were the two major contenders for the number one seat in the state. 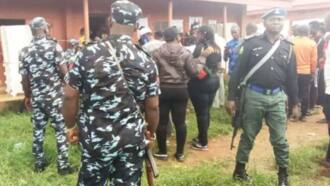 In another report, the election results released by the INEC indicated that the incumbent governor of Edo state, Godwin Obaseki, maintained an early lead over his main challenger and candidate of the All Progressives Congress (APC), Pastor Osagie Ize-Iyamu.

The governorship election was conducted in the state on Saturday, September 19, as the INEC started announcing results of polls conducted across the state.

The results of 13 local governments have already been announced by the electoral commission with Obaseki clinching 11.

In a related report, Oshiomhole won his polling unit, Unit 1, Etsako West LGA, for the candidate of the party in the ongoing governorship election.