With less than a month to the Ondo election, Peoples Democratic Party (PDP) and All Progressives Congress (APC) have been entangled in a fresh confrontation over the arrest of some thugs suspected to be working for Eyitayo Jegede, candidate of the opposition party.

The thugs, who were busted in Ifon in Ose local government area in a vehicle branded in the colour of PDP and its candidate, were arrested with various ammunition, according to ThisDay report.

The suspected political thugs were inside a Toyota Sienna bus branded with Jegede’s campaign pictures when they met their waterloo on Sunday, September 20.

Jegede and PDP have, however, distanced themselves from thugs, creating a fresh face-off between the former Ondo attorney general and the incumbent governor, Oluwarotimi Akeredolu. The Ondo state guber election has been scheduled for October 10, 2020, by the Independent National Electoral Commission (INEC), with the poll set to stage a repeated battle between the two senior lawyers who crossed paths in 2016.

Reacting to the arrest of the thugs, Governor Akeredolu through the spokesman for his campaign organisation Olatunde Richard, expressed shock and accused the opposition party of machinating violence against the APC members.

"We wonder if PDP sees the election as a war or an electoral contest for the seat of the state governor,” Richard said.

PDP, however, described the arrest of the suspected thugs as "an attempt by APC to make good its evil plans." 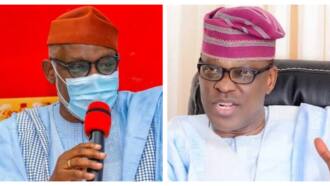 Assassination attempt: Akeredolu sends warning to Jegede ahead of guber

Meanwhile, Legit.ng reported that s intrigues continue to play out in the politics of Ondo ahead of the state guber election, PDP accused APC of masterminding the attacks on the campaign team of its flagbearer, Eyitayo Jegede.

In a statement released in Akure, the state capital, by Eyitayo Jegede Campaign Organisation (EJCO) director, Samuel Fasua, PDP said three vehicles in the convoy of its flagbearer were badly damaged.