The governor of Rivers, Nyesom Wike, has given his take on the conduct of the police and the Independent National Electoral Commission (INEC) in the just concluded Edo gubernatorial election.

Wike expressed satisfaction over the activities of the INEC and the Nigerian Police Force (NPF) that led to a hitch-free poll.

As the chairman of the Peoples, Democratic Party (PDP)'s national campaign council, Wike earlier complained about the behaviour of some security agents who besieged the hotel he resided during the gubernatorial poll on Saturday, September 19.

The governor had claimed that he challenged the security operatives who asked him to leave Edo state while the voting exercise was on-going. 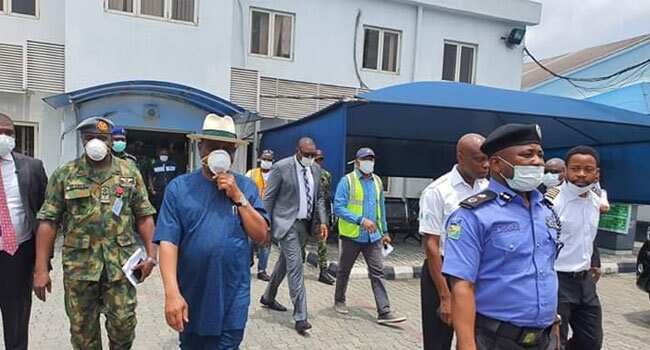 However, total assessment, Wike noted that due to the efforts of the police, the election was largely peaceful, meaning that the force has learnt its lessons from previous polls.

Moreover, he pointed out that with the victory of the PDP in the state, the south-south region can now speak with one voice on common issues.

“With the re-election of Governor Obaseki, the entire South-South Region is now completely PDP.

“What this means is that the entire South-South can now speak with one voice on issues concerning us.”

Meanwhile, Legit.ng reporetd that before the governorship election in Edo state, Governor Godwin Obaseki had threatened to unleash violence in full force should the All Progressives Congress (APC) take to the rampage path. Edo election: Obaseki makes crucial statement ahead of poll, reveals what electorate should do

The governor made this vow while addressing pressmen as the gubernatorial election in the south-south state draws closer.

Speaking about possible machinations of violence, Governor Obaseki said he will not hesitate to deploy violence because "there is no monopoly of it."

"Nobody has a monopoly of violence, if they want violence we will show them violence. If I see anybody smashing any car because my stickers or poster is there, let me know. "