Popular Links: Buhari Football EFCC Boko Haram Trending Nigerian Names Politics
Home | News | General | Lady causes massive stir on social media as she advises women against dating men between 19 and 27, says it'll end in tears
Petrol Subsidy Removed Because Of Fraud – NNPC GMD
Check out this Indian people Bollywood may not have shown you, they are called the Jarawas (photos)

Lady causes massive stir on social media as she advises women against dating men between 19 and 27, says it'll end in tears

- According to the young lady, anyone who goes into a relationship with such men will end up being heartbroken

A Nigerian lady with the Twitter handle @toolzdeyforyou has taken to the microblogging site to advise women against dating men between the age of 19 and 27.

@toolzdeyforyou said men between such age bracket are usually mama's boys and they never let go of their previous relationships.

The young lady said men between 19 and 27 have no plans for the future and they are only concerned about their game consoles and party. 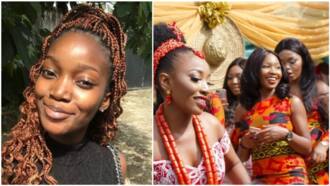 Igbo women are the most romantic women in Nigeria - Lady claims, sparks serious debate on the internet She warned ladies that such men will only hurt them because they are also in the habit of cheating and smoking weed.

"AVOID dating men between the age of 19-27.They r usually typical mama's boy,stuck on their ex,cheat the most,entertain hoes,party non stop,have no plans & are only concerned about their PS4,mixtape & weed.They don't know wat they want yet & will hurt u in the process, a liability." "I was only 25 years when I got married. It's over 10 years now and we are still waxing stronger together with three lovely kids. Age is not maturity. I've seen men and women of over 30 years who still act like kids."

Below are other comments:

In other news, a Nigerian man with the Twitter handle @SamSoja proposed to a lady he met on the microblogging site two years after sliding into her DM.