Ilkay Gundogan has tested positive for the dreaded coronavirus according to the latest information from Manchester City who face Wolves in their season opener on Monday night, September 21.

The 29-year-old star has been ordered into self-isolation and will not be available for selection for their season opener.

"Manchester City FC can confirm that Ilkay Gundogan has tested positive for Covid-19,” the club said in an official statement.

"Ilkay is now observing a 10-day period of self-isolation in accordance with Premier League and UK Government protocol on quarantine. 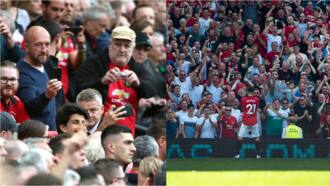 “Everyone at the club wishes Ilkay a speedy recovery.”

The German international featured for his country in their 1-1 draws against Spain and Switzerland in the UEFA Nations League last month.

He is yet to return to action as Manchester City had a delayed season opener due to their extended run in the Champions League in the delayed 2019-20 season. And City travel to Wolves on Monday night to get their 2020-21 campaign underway as Guardiola will hope to wrestle the Premier League trophy back from Liverpool.

Meanwhile, no fewer than 1000 fans each were allowed into 10 different match centres when action resumed in the English Championship.

The supporters were barred from gaining access to watch their favourite teams and players since coronavirus was declared a pandemic in March.

And this has taken a toll on all football clubs, not just in England, but across the globe as their revenues have been greatly affected. However, as part of plans to start easing the fans into the centres, the league chiefs are said to have agreed with Culture Secretary Oliver Dowden that about 1,000 spectators be given access at 10 venues across the three divisions.

Legit.ng earlier reported that David Okereke has returned positive result after all members of his Club Brugge exercised another round of the coronavirus tests.

The Belgian Pro League champions have announced the development that Okereke who tested positive for coronavirus has been isolated from the squad.

The 23-year-old scored in the club’s 4-1 victory over Waasland-Beveren on Saturday, September 11.

“David Okereke tests positive for Covid-19. The attacker was immediately quarantined and will be retested next week,” reads a tweet on the club’s official Twitter handle on Tuesday, September 15. 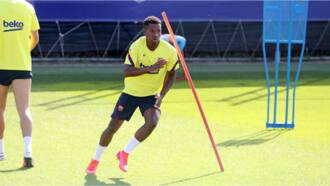 Just in: Fresh crisis in Barcelona as important player suffer injury days after Messi agreed to stay back