Barely twenty-four hours after the ruling All Progressives Congress (APC) suffered an unprecedented defeat during the Edo governorship election held on Satuday, September 19, some leaders of the party have visited President Muhammadu Buhari in Aso Rock.

The Nation reports that the president on Monday, September 21, received the chairman of the APC, national caretaker committee, Governor Mai Mala Buni, and the governor of Kano state, Abdulahi Ganduje, at the State House, Abuja.

Legit.ng gathered that although Buhari met with both governors behind a closed-door and that the visitors did not speak to journalists, they were suspected to have met over the outcome of the Edo governorship election.

Recalls that Ganduje, who was chairman of the APC Edo governorship campaign council, and his Imo state counterpart, Hope Uzodinma, who is also a member of the council, spent the weekend in Benin City.

It was reported that Ojezua made the statement when reacting to the victory of Godwin Obaseki of the PDP in the election.

He stated that he was saddened by the fact that Obaseki didn’t win the election on the platform of the APC. 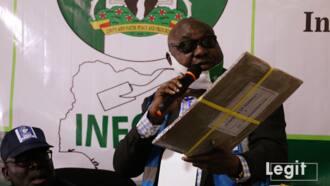 The politician suggested that the governor could have won the election on the platform of the APC if Adams Oshiomhole did not push him out of the party by unwholesome disqualification.

In another report, Governor Nasir El-Rufai of Kaduna hailed President Buhari for upholding smooth electoral processes in the Edo election.

El-Rufai stated that as a lover of democracy, the president allowed things to take their natural cause in the just-concluded poll.

He noted that President Buhari-led government, unlike past administrations, will never resort to what people know as federal might to influence the results of polls.