Popular Links: Buhari Football EFCC Boko Haram Trending Nigerian Names Politics
Home | News | General | Do you research: Queen Nwokoye to troll who said she was 'unmarried at 50'
How cabals enriched themselves with benefits of subsidy payments - NNPC open can of worms
Man faces dangerous crocodile, tells it to get out, this was how the animal reacted (video)

Do you research: Queen Nwokoye to troll who said she was 'unmarried at 50'

- According to her, people of the current generation don't value courtship as they prefer 'quickies'

- A troll responded to her tweet, accusing her of clout chasing as she said the actress' standpoint was the reason she was still 'unmarried at 50'

- Nwokoye who is married with kids, had quite the reply for the troll

Recall earlier, the filmstar took to her Twitter account to speak following the backlash Ozo got after his exit from the show. According to her, people of the currently generation don't value courtship. 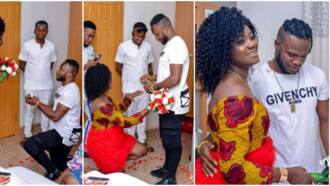 The post which got several engagement had a troll coming for the 37 year old actress. The account identified as @Nkemdili5 accused her of clout-chasing and ignorantly pointed out that her views on courtship was the reason she was 'unmarried at 50'.

The actress who is in fact married with kids, responded to the troll, advising that they do their research before talking about things.

"Famzing gone wrong. Don't worry,my son will marry you. And as my daughter in law,you will hear nwi. On a flip side,do your research well before you open your dirty mouth. Being stupid doesn't fit you."

The BBNaija reality show is gradually entering its final week and the housemates have been reduced by another two.

During the recent eviction show, Ozo and Trikytee were sent packing. Triky was at the bottom of the poll with just a little over 4% votes while Ozo had about 19% votes. After Trikytee’s name was announced that he was to leave the show, housemates gathered around him for a hug.

Things were a bit different in Ozo’s case. He seemed to have eyes only for his love interest on the show, Nengi, as he gave her a tight hug and attempted to do something else.

EXCLUSIVE: 17 Years After Their Marriage. Ramsey Nouah Has This to Say About His Wife | Legit TV