Popular Links: Buhari Football EFCC Boko Haram Trending Nigerian Names Politics
Home | News | General | Man faces dangerous crocodile, tells it to get out, this was how the animal reacted (video)
Do you research: Queen Nwokoye to troll who said she was 'unmarried at 50'
How President Buhari helped me defeat APC, others to win Edo election - Obaseki opens up

Man faces dangerous crocodile, tells it to get out, this was how the animal reacted (video)

- The host of Outright Wrangler on National Geographic, Matt Wright, went viral after he shooed away a saltwater crocodile

- When the clip of the event was posted by him on Instagram, people had so many questions, wondering how he could do that

An Australian man who goes by the name Matt Wright went viral this week after he posted a video of him shooing away a 13-foot crocodile nicknamed bonecruncher.

Fox News reports that the funny incident happened while he was trying to get logs out from a river. In the viral video, he could be seen being tailed by the big crocodile.

BBNaija: Kiddwaya says N85m is not a small amount as he explains reasons for participating in reality show

"We're just trying to get a few logs out of the water here, having a bit of a hard time, we've got a little friend that's come and visited us,” he said in the video as the crocodile follows him gently.

The croc silently was swimming to him as he made the video speaking into the camera. Just when the animal was getting too close, he shooed it, telling the crocodile to stay away.

That act was one very unbelievable moment. Wright yelled, “Go away! Get out!”. Then he commanded it to “Sit!” as if he were addressing a dog.

Before pushing the croc away, he patted it on the head. Later on, the hunter said that “Guys, understand this is not normal behaviour for a saltwater croc”

He went ahead to say that despite working with crocs for over 20 years and bonecruncher for seven years, he has never seen any behave in such a way. See how this dog and tortoise displayed their talent playing football, video showing them goes viral 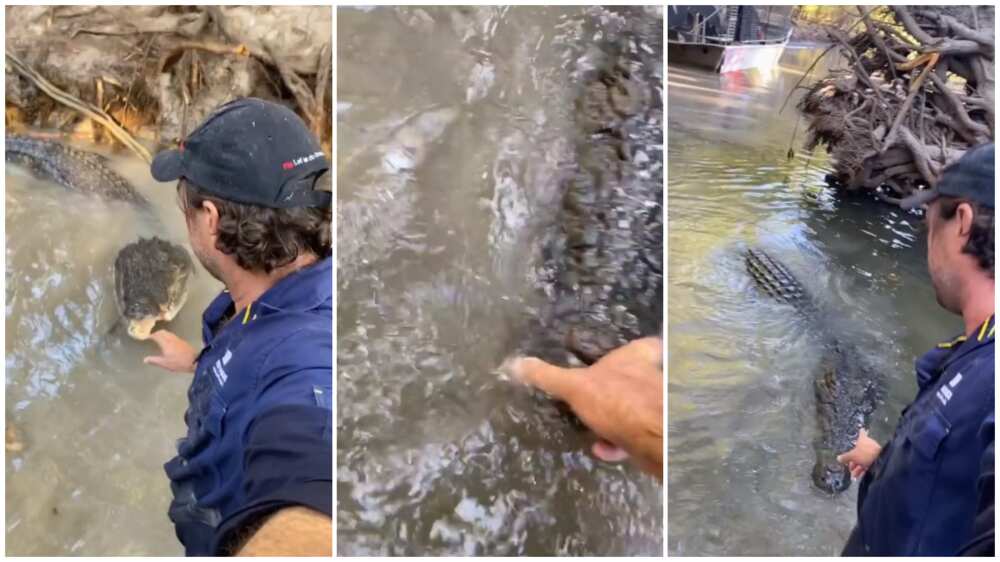 Below are some of the comments on the video:

This is a wild and perfectly healthy croc, isn’t it? Just want to clear it up for those who think he’s disabled in some way.

Lol. Only in Australia can you shoo away a 15 crocodile like it's a little puppy

Is he trying to attack and he just can’t do damage because of his injury anymore? Or is he actually wanting to play in a way?

Meanwhile, Legit.ng earlier reported that a black woman with the name Jose Scott shared a very funny picture of her dog, Esther, that went to a party with friends.

The photo she shared on Saturday, September 19, showed her dog in the company of others as they all stood together around a covered table that looked like they just indeed had a party. 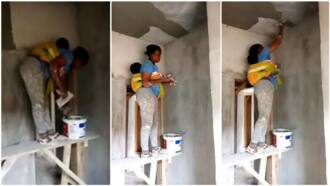 See how this female painter backed her child while working to feed family, video goes viral