- Buhari said as a leader, he took responsibility for the defeat of the ruling party in the recently-held Edo poll

- The president, however, declared that he is the leader of Nigeria and he must ensure that the wish of the people is thoroughly manifested

President Muhammadu Buhari on Friday, September 25, said he took responsibility for the defeat of the All Progressives Congress (APC) in the Saturday, September 19 Edo guber election.

The president made this known at the State House after receiving Edo newly reelected governor, Godwin Obaseki, his deputy Philip Shaibu and some notable members of his supporters' group.

Buhari said as the supreme leader of his party, he is always at the centre of discourse especially when his party loses some elections to the opposition parties.

The president, however, noted that he is the leader of the country and there is a huge responsibility on him to ensure that the wishes of people prevail above the party interest. 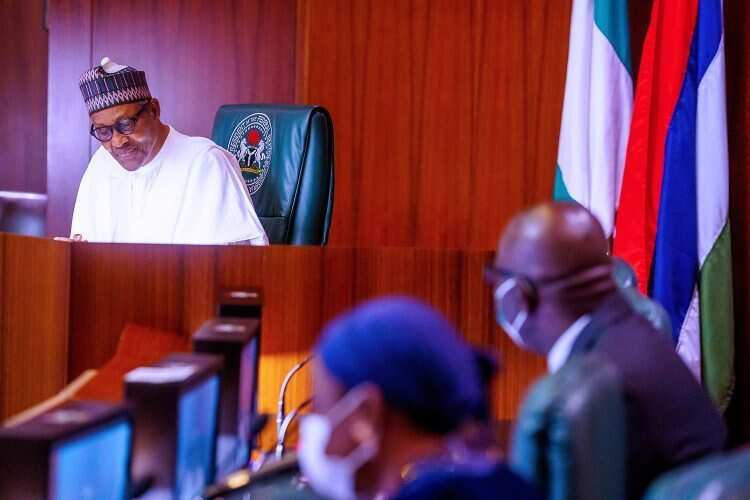 President Muhammadu Buhari has asserted his place as the supreme leader of the APC. Credit: Twitter (Nigeriagov).
Source: Twitter

According to him, that is the reason he gave a level ground for all the fourteen candidates who participated in the governorship election which Obaseki of Peoples Democratic Party (PDP) won.

“We have lost states across the country. Now I do not like to escape the responsibility, seeing as the leader of the country, I am also the leader of my party, that I am not leading the party very well.

“I am trying to make sure that the party is built on a civilised basis, rule of law and respect for human rights and human beings."

Legit.ng recalls that Governor Obaseki comfortably sailed to the shore of victory as he defeated Osagie Ize-Iyamu of APC.

The Edo governor was declared the winner of the anticipated poll by INEC, having met all requirements by polling 307,955 and winning 13 out of the 18 local government areas in Edo state.

Godwin Obaseki later showered a flurry of encomium on Presiden Buhari, with the Edo governor saying that he won the election because the Nigerian leader wanted people's will to succeed.

Buhari thanks Obaseki for paying him a courtesy visit

Earlier, it was reported that the president thanked the Edo state governor for bringing his deputy, Shaibu to see him after beating APC at the governorship election.

The president said he sent a message across to the Inspector General of Police, stating that the governorship elections must be free and fair.