- A chieftain of the APC, Prince Tony Momoh has spoken about the defeat Osagie Ize-Iyamu suffered in the Edo election

A chieftain of the All Progressives Congress (APC), Prince Tony Momoh has said some behind the scene forces worked against Adams Oshiomhole and Osagie Ize-Iyamu during the Edo governorship election.

According to the Sun, Momoh in an interview with Vincent Kalu disclosed that segmented loyalty played out in Edo and was the decider in the election. 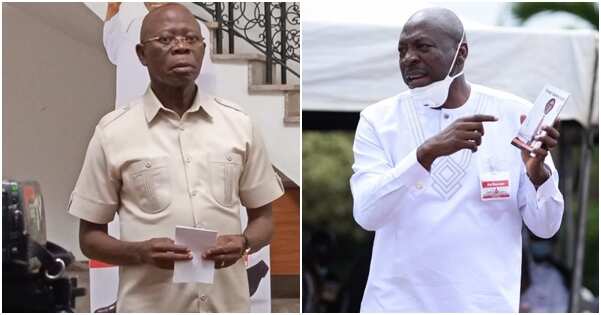 He explained that segmented loyalty among the senatorial districts and groups in Edo dominated above party loyalty during the poll.

Momoh pointed out that the election was mainly between the Edo North versus Edo South.

The APC chieftain stated that the Edo South which has 52% of the electorates voted overwhelmingly for Obaseki during the poll.

He said the people of Edo South felt that it was the former APC chairman, Oshiomhole and not Ize-Iyamu that was campaigning for votes.

According to him, voters in Edo South thought Oshiomhole overshadowed the campaign of the APC governorship candidate.

On the other hand, he pointed out that almost all the local governments in Edo North massively voted for the APC because of their loyalty to Oshiomhole.

Meanwhile, President Muhammadu Buhari on Friday, September 25, said he took responsibility for the defeat of the APC in the Saturday, September 19 Edo guber election.

The president made this known at the State House after receiving Edo newly reelected governor, Godwin Obaseki, his deputy Philip Shaibu and some notable members of his supporters' group.

Buhari said as the supreme leader of his party, he is always at the centre of discourse especially when his party loses some elections to the opposition parties.