- Some leaders of the PDP on Saturday, September 26, met former president Ibrahim Babangida in Minna

Basking in the euphoria of its victory in Edo state, members of a Peoples Democratic Party (PDP) reconciliation committee on Saturday, September 26, met with former president Ibrahim Babangida.

Channels TV reports that the chairman of the committee and Bauchi state governor, Bala Mohammed, told reporters at the Minna airport that the purpose of the meeting was to strategise on how to move the party forward.

Legit.ng gathered that Mohammed said the committee was set up by the party’s National Working Committee (NWC) to see how the PDP can maximise the gains it has made in recent elections, including in Bayelsa and Edo. 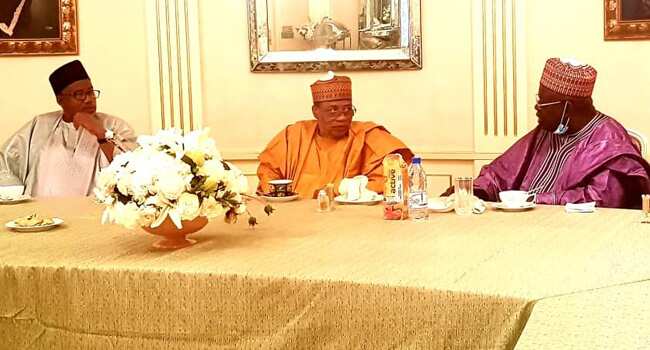 Some chieftains of the PDP meet the former president of Nigeria, Ibrahim Babangida in Minna.
Source: UGC

Other members of the reconciliation committee who visited Babangida include former Governor of Jigawa state, Sule Lamido and a presidential aspirant of the PDP in the 2019 presidential election, Kabiru Turaki (SAN).

The visitors, who were led by the former governor of Niger state, Muazu Babangida Aliyu arrived Minna airport in a charted aircraft with registration number N604WL at exactly 1:15 pm on Saturday, September 26.

The meeting with Babangida lasted for over three and a half hours.

“We came on a National Working Committee assignment to look at the problems and challenges of PDP generally and how we can maximise our fortunes, how we can move forward, coming out of the rubbles of loss in 2019 with dignity and humility, to be able to carry ourselves and provide the necessary leadership for this country to move forward.

“PDP is the darling of the country because we have learnt our mistakes in the past and we have admitted that, and you can see what happened in Edo. And by the grace of God, we will in Ondo, not by imposition, arrogance, exclusion and what have you, but by best practice;

“And that is why the National Working Committee, under the chairmanship of Uche Secondus, set up this committee to review the causes of our loss in 2019 and to see how we can maximise our fortunes and our gains that we are making so far within the Nigeria political landscape.

Meanwhile, Legit.ng had previously reported that the PDP in Ward 7, Egor local government area of Edo state, praised voters in the state for reelecting Governor Godwin Obaseki for the second term in office.

It was reported that the party stressed that residents of the state resisted an attempt by the opposition to financially induce them.

The councilor representing Ward 7, Egor LGA, Hon. Derrick Uhunmwangho gave the commendation at a victory party to celebrate the reelection of Governor Obaseki by executives and members of PDP in the ward.