- In the clip, she gave a perfect adult look as she placed what looks like a phone on her face

Children are very impressionable. No wonder parents as agents of socialisation are very vital to their growth as individuals in society.

A little girl has gone viral after a short clip showing her mimicking an adult talking selfie surfaced online. One would be amazed at the number of things kids pick up from grownups around them.

In a video that has over two million views on Twitter, the kid's quick reaction when she saw that her selfie-taking was being filmed is funny.

While in a car, the girl held up what looked like a device, raised one hand up with the gadget above her head as she readied for a shot.

Immediately she realised someone, possibly her mom, was filming her from the car's front seat, she quickly brought her hand down, contouring her face in a funnily childish way.

Her reaction became an instant material for laughter. @cctv_idiots captioned the video saying "They grow up so fast".

Below are some of the reactions the post got:

"Wow, the amount of people jumping straight to "bad parenting" she could have picked this up from anyone. Plus, she was happy and healthy lighten up peeps"

"Someone has been copying the dad"

It also got some quoted replies: 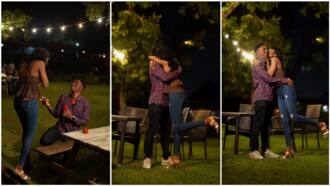 Pre-wedding photoshoot of this couple set Twitter on fire, see what people said after the man knelt down to propose

Meanwhile, Legit.ng earlier reported that another video surfaced online of a baby who tried to start her parent's car with an attempt to drive it.

She did not expect the next thing that happened. As the toddler fumbled with the car key trying to insert it into the start hole, not knowing her other hand was on the horn pad on the steering wheel, she honked it.