- A US medical doctor, Jennifer Asotib, has celebrated in a grand style as she bought herself a birthday car gift

- Jennifer said that though the automobile may not be like DJ Cuppy's own, she is in no way less proud

A lady with the Twitter name Jennifer Asotibe and an American doctor has bought herself a car as a birthday gift. She said that she is very excited about it all.

In a tweet on Thursday, September 24, she said that though it may not look like a Cuppy-kind-of car, she is very proud of herself.

The billionaire who is no doubt a doting father went shopping for his daughters and splurged millions of naira on fast cars for them.

Otedola purchased a Ferrari Portofino for each of his three daughters, Temi, Tolani, and DJ Cuppy. A 2020 model of the fast car reportedly costs about $215,000 (N83.2 million). 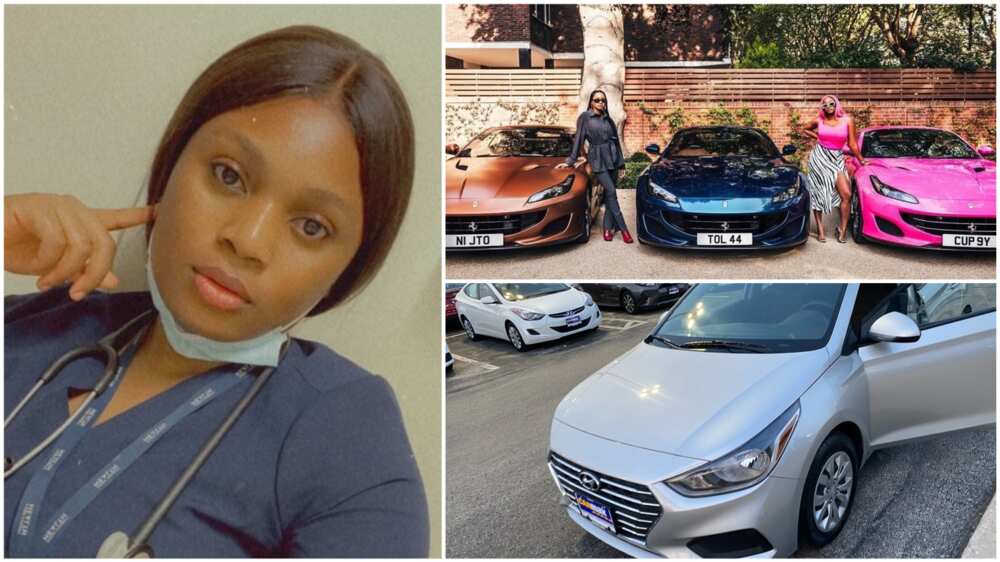 A collage of the lady, her car and Otedola's daughters with their Ferraris. Photos sources: Twitter/Jennifer/Instagram/DJ Cuppy
Source: UGC

Jennifer said she looks forward to achieving greater things in the future.

People who commented on her tweet congratulated and wished her more wins.

"Yaaaayy Congrats my darling!!! You deserve this and so much more"

"Congrats darling, you deserve this and even more..."

Meanwhile, Legit.ng earlier reported that a Nigerian father, Oluwadamilare Dauda, said that though he is not Otedola, he got bicycles for his two daughters.

In his tweet on Wednesday, September 16, the young man said that Ferrari is loading as a show of faith in the things he could do more if he were as rich as the billionaire father.

In the picture he shared on the micro-messaging platform, his daughters could be seen on their bicycles as one of them fumbled with her bike's handbrake.