Alisson and Thiago Alcantara are in a race against time to pass a late fitness test for their crunch Premier League clash against Arsenal.

The Brazilian shot-stopper and the Spanish midfielder were not involved with other squad members at their Melwood training ground.

Thiago made a memorable debut for the Reds in the 2-0 win over Chelsea and Stamford Bridge and set a new passing record. 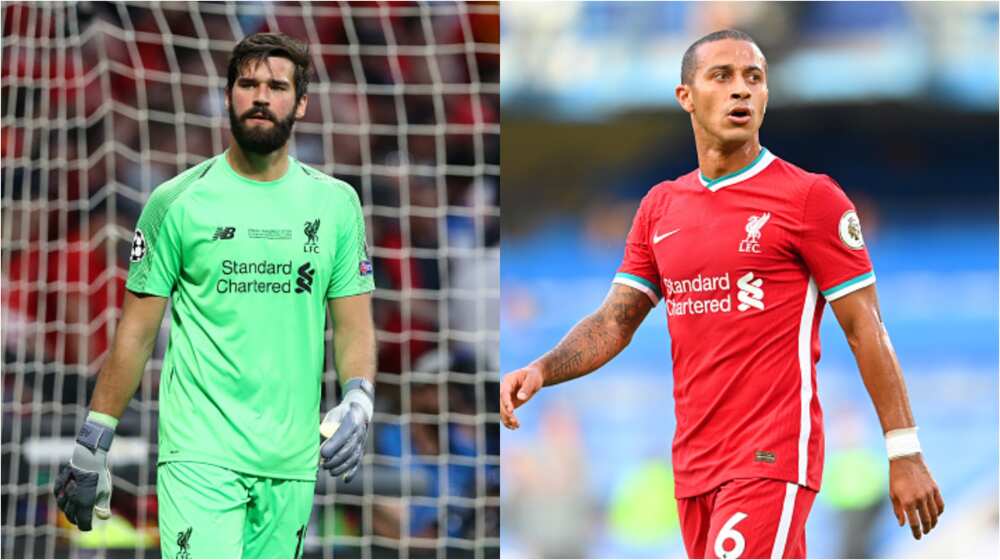 The likes of Jordan Henderson and Joel Matip have also been ruled of the tie against the Gunners at Anfield.

Jurgen Klopp is currently facing a selection headache has hinted that Thiago could play a key role in their crunch Monday night fixture.

"We will see, we have a few days to train," he told reporters per TeamTalk. "Some of the boys have to recover from last night, so we will see how we set up against Arsenal.

"I have an idea but why should I make the decision today when we have time until Monday? But he's in, he's in contention. So let's see."

Meanwhile, Legit.ng had earlier reported that Lincoln City vs Liverpool ended in an overwhelming 7-2 victory for the Reds as they progressed to the next stage of the competition.

Curtis Jones and Takumi Minamino both scored a brace as Xherdan Shaqiri, Marko Grujic and Divock Origi completed the comprehensive win over the League One side.

Tayo Edun and Lewis Montsma put their names on the scoresheet for Lincoln as the match produced nine goals.

The Spanish midfielder who recently completed a switch from Bayern Munich on Friday, September 18, needed just 45 minutes to complete 75 passes two days after his signing.

It is also the most successful passes completed by any player with a maximum of 45 minutes in the Premier League since records began in the 2003-04 season.