Actress Mimi Orjiekwe: I pity women who marry men with no class, because they will suffer

- According to the Nollywood actress, women who end up with such men deprive themselves of some luxuries as they'd be forced to manage through life

- Orjiekwe ended her writeup with a piece of advice to women, stating that they should choose wisely the type of partners they end up with

Nollywood actress and businesswoman, Mimi Orjiekwe, recently caused mixed reactions online after she took to social media to write about women who end up with classless men.

Orjiekwe who is a divorced mother of one in a recent Instastory post, expressed pity for women who end up with men that have no class.

She stated that such women will be forced to manage funds through life. According to her, these women won't enjoy some luxuries in life.

"I pity who go marru man with no class.."manager" is your name. This life, choose wisely." 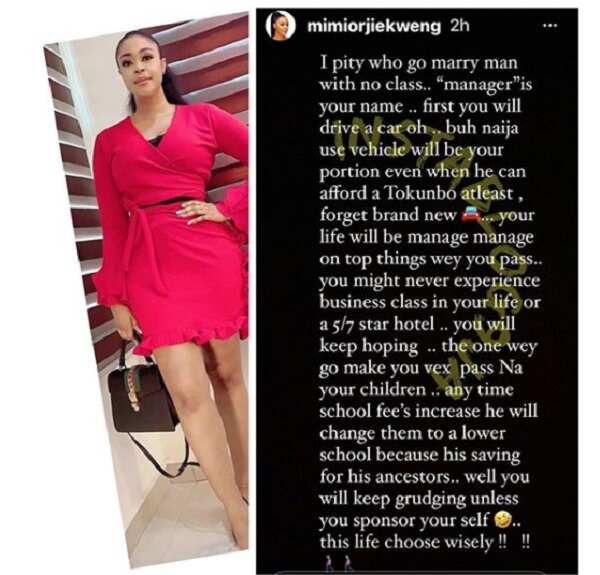 Her post which has since gone viral, caused mixed reactions amongst social media users.

"Whatever happened to assisting your husband . If 4 star hotel is what he can afford or tokunbo car he can afford , can’t you add money to help... all these actresses that want to be by force relevant please avoid us."

"This writeup has too be the daftest I've read today. "

"That's why your type will not allow people husband rest. You don't want to build a dream with any but you are looking for already made. What happens to making your own money too. Anuofia"

"I got married to an intelligent man with focus and also a master degree holder. We started with no car but we are happy. We worked hand in hand with prayer and hardwork. 12years in marriage I av 2cars, hubby has 3 and we leave in a duplex. Please y'all should stop misleading people, it's ok if u get a rich man everybody like money but getting a focused willing to attaining greater heights is the best. Women in this country are really hardworking and making money without a man in their lives. Stop misleading people abeg."

"If you can afford to give yourself those things why do you bother about what he can give. First treat yourself right and then he can learn. Stop feeling entitled to the life you cant even give yourself."

In other news, Nollywood actress and reality star, Eriata Ese, recently took to social media to dish out some interesting piece of advice concerning people's attitude towards money-making and gratitude for life.

According to the 2017 BBNaija ex-fake housemate, money isn't everything, contrary to what many people often say and think.

Eriata who is also a brand influencer noted that even though money solves your problems, it is incapable of making one happy.