- NLC and TUC have accepted deregulation as a policy

- According to a Guardian report, NLC accepted after it was pressured by other groups

- Meanwhile, the government has agreed to reverse increment in electricity

The Guardian reports that NLC reluctantly accepted this after it was pressured by other unions.

The news outlet added that the decision was influenced by petrol marketers, tanker owners and other stakeholders.

Going further, the report added that the federal government also accepted to reverse the increment in the electricity tariffs.

The meeting started at 8.37pm on Sunday, September 27, at the banquet hall of Aso Rock.

Meanwhile, the report added that both labour unions will only take a final decision on the matter when it reached concrete agreement with government. 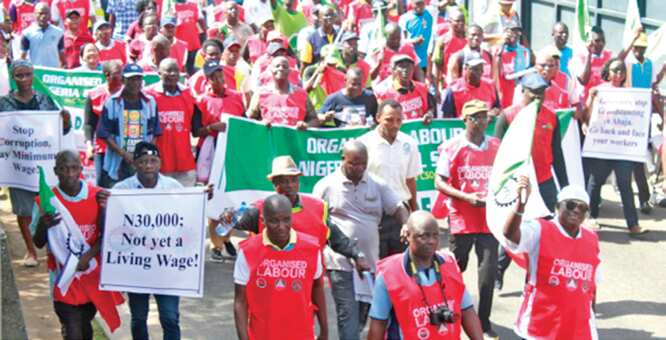 NLC and TUC have accepted deregulation as a policy. Credit: Vanguard.
Source: UGC

Recall that Legit.ng had reported that as Nigerians are making preparation for another strike action by Nigeria's labour unions, the FG in apparent move to prevent the planned strike scheduled a meeting for 7pm on Sunday, September 28.

Legit.ng had also reported that the last-minute efforts carried out by Speaker Femi Gbajabiamila of the House of Representatives to halt a planned strike by the organised labour may have failed to yield any positive result.

Earlier reports had showed that the speaker was in a meeting with the leadership of the organisation to come to an amicable resolution of the issues surrounding the grievances over the recently increased price of petrol and electricity.

The meeting between Gbajabiamila and the NLC leadership reportedly held at the National Assembly Complex in Abuja.

Legit.ng also reported that in a second attempt to stop the NLC and the Trade Union Congress (TUC) from embarking on their planned strike, the federal government recently obtained a fresh court order.