- However, the Citizens have landed Ruben Garcia from Benfica for £64million

Kalidou Koulibaly has been linked Man City during the current transfer window but the Citizens have finally signed Ruben Dias and mistakenly confirmed the Napoli star's arrival.

Dias was brought in from Benfica for £64million on a six-year deal at the Etihad to help solve their central defensive problems.

However, the Manchester club who were already prepared to hand the Portuguese defender the No.3 shirt after his announcement inputted Koulibaly's name. And eagle-eye City fans spotted the error following a new link on the club's official website which read:

The Sky Blue fans then went on Twitter as they joked with the post to another level.

“Imagine City don’t even announce Koulibaly and we just sub him on randomly in a game.”

“Koulibaly to City means Pep will probably use a new line up with 9 defenders and De Bruyne lol.”

“Haha so we were prepared for Koulibaly.”

Since City were favourites to land the Napoli defender this summer, the post was done in anticipation of the arrival of the 29-year-old defender.

Pep Guardiola had earlier landed Nathan Ake from Bournemouth this summer for £40m which takes their spending on defenders to £104m.

City were thrashed by Leicester City by 5-2 over the weekend and gave away two cheap penalties in the game.

Guardiola has been concerned about his defensive set up, especially in the middle where Ake had to partner with the inexperienced Eric Garcia. Aymeric Laporte has also been a huge concern for the Spanish manager after the Frenchman endure series of injury problems.

Meanwhile, Legit.ng had earlier reported that Ruben Dias has been unveiled at Premier League club Manchester City after the defender signed for the club from Benfica in a deal worth £65million, while Nicolas Otamendi switched the other way.

With the transfer window closing on Monday, October 5, City have so far completed three signings including Ferran Torres and Nathan Ake.

Reports say the deal for Dias is around an initial £62million, with a further £3million subject to add-ons as he signs a six-year deal and had been handed the no.3 shirt. 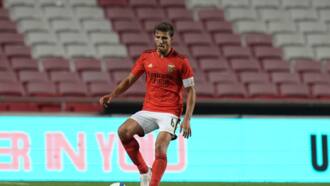