- According to a Facebook post about the incident, the boy's old bike did not have any brakes, which may have been what caused the dent

A little boy was brought to tears after he received a new bike from a stranger. The little boy accidentally dented the stranger's car with his previous bike which, dangerously, did not have any brakes on it.

To the boy's surprise, the stranger returned a few days later with a brand new red bike for him. It is unclear who the boy or the man are but this good deed is warming hearts across the globe. A picture of the man giving the boy his new bike is trending. 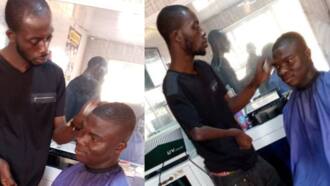 Young man narrates how a disabled barber gave him the best haircut of his life, shares adorable photos online

The picture and caption were initially uploaded to Reddit by someone simply identified as Schefar. It was then reuploaded to Facebook page Great Heroes and has since received a lot pf p Briefly.co.za compiled a few of the top comments under the post.

"What a kind man. He could have yelled at the kid for running into his car."

"What an amazing man you are to think of this young man and his safety. A car can be fixed but not a life. You are awesome."

"I love the choice that the driver made! How very kind. My hope is that the young boy will pay it forward!"

"This man could have been really annoyed at what happened. But instead chose a different response to the event. What an awesome man." 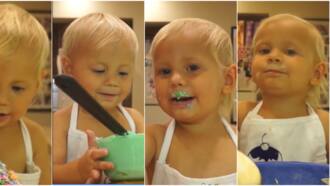