The gun battle forced journalists, party agents and observers to flee for safety, The Cable reported. The police foiled an attempt by thugs to disrupt the collation of results. Photo credits: Getty Images
Source: Getty Images

The incident was reported to have occurred outside St Peter’s Primary School, which was being used as the collation centre of Akure south local government area in Ondo.

Some of the policemen manning the entrance to the collation centre told journalists and observers to leave the area due to safety concerns. 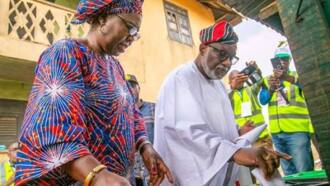 Ondo governorship: They are afraid my husband is winning - Akeredolu’s wife declares

A policeman said some hoodlums were planning to hijack ballot boxes at one of the polling units in the area.

Meanwhile, a video that purported to show the wife of the Ondo state governor, Betty Anyanwu-Akeredolu, being attacked during voting has been described as fake.

The Ondo state First Lady told Channels TV on Saturday, October 10, that desperate politicians were behind the fake video.

She said they resorted to such desperate schemes because they are afraid that her husband is winning the Ondo governorship election.

In another news, Governor Rotimi Akeredolu has declared that he is waiting for his victory to be announced by the Independent National Electoral Commission (INEC).

The governor made the declaration after casting his vote alongside his wife at Ward 05, unit 06, Ijebu 2 Owo. Speaking to journalists after voting, Governor Akeredolu said the thought of not winning has never crossed his mind.